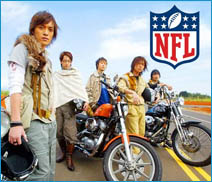 The show will feature the band getting to know players and cheerleaders as well as fans in an effort to raise awareness and build a fanbase for the sport in China. 16 episodes of the show will be created and run through the season until Superbowl and preface a 30-minute football highlights program.

Indie rockers Mayday are one of the most popular bands in China and have sold more than a million albums in the past decade, the Taipei Times reported. – CelebrityAccess Staff Writers