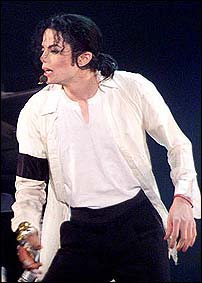 It appears that Michael Jackson and Sony are in the process of securing a divorce with Jackson taking a stance against the record label, according to the New York Post. "Jackson's crusade against Sony Music is a face-saving strategy," reports the Post. "Insiders say Sony is sick of the unprofitable Michael Jackson and is releasing two greatest hits albums back-to-back next year, just to get rid of him."

"Michael has two albums on his contract left, and Sony will deal with it in the only way it can be profitable – a greatest hits compilation," a source told the paper.

"Sony can't figure out what
Michael's beef is with them," the source said. "They were startled when he had that whole press conference with Johnnie Cochran and Al Sharpton, claiming he was a slave to the music industry."

Sony was said to be caught completely unaware, according to the Post. "Michael is trying to get some more publicity so that he can get a record
deal with another company when the contract with Sony is up. Sony let him know a while ago they wouldn't be re-signing him," the paper added.