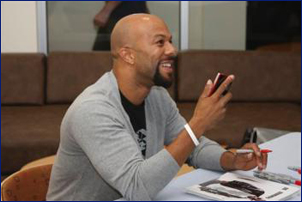 SEATTLE (AP) — A video for the title track on hip-hop veteran Common's forthcoming album, "Universal Mind Control," begins with a digital music player pulsing to the beat. The viewer is pulled through the screen into the gadget's guts, where the cool, collected rapper lets loose an easy stream of lyrics.

It takes hitting rewind a few times to notice that the music player isn't one of Apple's slim new iPods. It's a Zune, and it's made by Microsoft Corp.

Since it first landed two years ago, the Zune has been the butt of many jokes, like how its wireless music sharing feature would be great, if only a second person would buy one. But while Apple Inc. has counted on the sex appeal of its ever-thinner devices to keep consumers turned on, the Zune team has been beefing up its software and courting artists like Common, a dashing MC with mainstream appeal who might just help make Zune — dare we say it? — cool.

The relationship between Zune and Common began last summer, when the rapper performed a set at a Microsoft-organized concert in Los Angeles. Zune sponsored Common's latest tour and is kicking in posters, T-shirts and other materials to promote the new album, though Microsoft says it didn't pay extra to place a Zune in Common's music video. Now, the Chicago rapper on Monday became the latest face in Zune's national TV ad campaign. Neither side disclosed financial terms.

In an interview, Common described Zune as "progressive, fresh, innovative," a far cry from critics' refrain that it's an also-ran in a race iPod has already won. When he's pressed to explain, it becomes clear that Common is hooked less on the device than the way the Zune's software makes connections between artists, turning up new sounds for him to explore.

In the Zune program that runs on desktop computers — which functions as a user's music library and a music store, much like Apple's iTunes — clicking "mixview" brings up a collage of musicians or bands related somehow to the one the user was listening to. Clicking any of those new faces shuffles the six-degrees-of-separation-style interface to show a new round of photos of the artist's influences or proteges, similar-sounding singers and other related groups.

In the TV ad, Zune pairs Common with one of his biggest influences, Afrika Bambaataa. The two men trade lines about music and personal style from their places in a moving collage much like the "mixview" screen.

"It is digging in the crates the way we used to do as musicians and DJs," Common said in the interview. "Being music lovers, we would go to music lovers to try to discover music."

The serendipity enabled by the software is a point Microsoft has been trying to get across. Zune's latest campaign, said Chris Stephenson, a marketing general manager for the company, stresses that "mixview" is designed to be "a reason to download the software. From there, everything else should flow," including subscriptions to the ZunePass all-you-can-listen music service, eventually, more Zune sales.

For now at least, iPods remain dramatically more popular. Apple snagged 71 percent of MP3 player sales from January to September of this year, to Microsoft's 3 percent, according to market researcher NPD Group. Apple says 160 million iPods have sold since their 2001 launch, while Microsoft reports 2.5 million Zune sales since the 2006 debut.

The Zune's distant runner-up status aside, Stephenson said the Zune has found better-than-average success among blacks, Hispanics and 18-to-24-year-olds, though he wouldn't go into specifics. Encouraged, the Zune team has sharpened its marketing to those constituencies.

Common, a brand-savvy rapper and actor willing to team up with big companies — he promoted Gap clothing in a 2006 holiday commercial — is an apt poster child for Zune, because he appeals to hip-hop fans but also plays well in the mainstream. A second TV spot features Tennessee rockers Kings of Leon talking to The Band's Robbie Robertson, a nod the college-age indie music crowd. Online, Zune ads feature lesser-known artists. In keeping with the theme of the current campaign, discovering new music through connections, Zune is using Web ads to promote Mr. Nelson and The Stills, groups suggested by Common and Kings of Leon.

Playing to its strength among Hispanic consumers, Microsoft in September made an exclusive deal to sell digitally remastered albums by some of Fania Records' biggest names, including the Fania All-Stars and Celia Cruz. The company also started working recently with Univision, which now devotes a section of its Web site to promoting Zune's Latin music collection.

In contrast, Apple's marketing tends to be more about the iPod itself, pairing catchy anthems with images of the iPod, not artists. Apple had no comment.

Despite their differing marketing approaches, Microsoft and Apple are, in the end, after the same thing: getting consumers hooked on the one-two punch of software and hardware. Apple seems just as busy keeping its iTunes software fresh, including the recent addition of a "genius" feature that builds music playlists on the fly, filled with songs related to one that's currently playing.

And given Apple's success, it's not clear Zune's tack — giving consumers connections to the music itself, and pushing the Zune's software more than the device — can help it close the gap with Apple.

But the strategy is helping Zune make progress on one very important front: outrunning Microsoft's awkward, uncool vibe, which has clung to everything from the long-delayed Vista operating system that failed to wow, to that first clunky brown Zune.