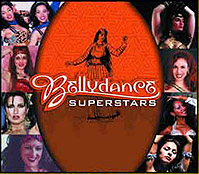 Miles Copeland is producing the first ever documentary on bellydancing in the United States. Copeland's record label Mondo Melodia, has achieved success in bringing Arabic repertoire to the mainstream. Well known for his skill in alternative marketing, Copeland decided to use bellydancers in an effort to augment awareness of Mondo Melodia's music and found himself intrigued by the culture, politics, and history of bellydancing itself. Thus inspired, Copeland brought the 8-member American dance troupe, Bellydance Superstars, to Los Angeles for two concert appearances in 2002. This year the Bellydance Superstars will perform in more than 30 cities nationwide as well as participating in Copeland's documentary film, "American Bellydancer."

"I took on this project for a variety of reasons," Copeland says . "The first is that bellydancing is an exotic, sensual art, and I was absorbed by it. But I was also fascinated by how bellydance was growing in America. I wanted to know what was happening in the minds and lives of the dancers, teachers, and fans. I wanted to know why it was happening now. The more I learned about bellydancing and its culture, the more I became interested in it, and "American Bellydancer" is an outgrowth of that interest."

"American Bellydancer" explores the rapidly developing world of the ancient art in the United States. Almost explosive in its growth, bellydancing has inspired dance troupes, bellydance schools, a thriving internet community, and a new generation of dancers. Bellydancing addresses issues of gender politics, religion, spirituality and ethnicity. Yet it's also a tremendously entertaining art form — which explains why it has remained vital since its estimated origin in 200 B.C. At a time of fragile relationships between the US and the Middle East, bellydancing bridges the cultural and political divide.

"It's been a challenge to bring Middle Eastern music and dance to the U.S. in
the current political environment," Copeland says. "The fact that we've encountered occasional negatives has been far outweighed by the positives. Bellydancing is about art, not politics, but in experiencing the art, you also experience the culture, and that becomes political in and of itself."

"American Bellydancer" is directed by multiple award-winner Jon Brandeis, who's worked in various capacities within the film and TV community. Brandeis' credits include properties developed for ABC, Bravo, Showtime, Cinemax, VH-1 and MTV, among many others. The documentary, which began shooting in Puerto Rico and Miami in February, delves into the world of U.S. dancers via interviews with teachers, students at all levels and fans. It includes footage of dance performances in cities across America. Together, each element combines to provide a comprehensive view of the evolving American art of bellydance.