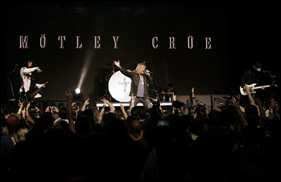 The band will be joined by Godsmack, Drowning Pool, Theory of a Dead Man and Charm City Devils on the outing which will see them performing 1989’s ‘Dr. Feelgood’ in its entirety,

Many of the tracks from the album have never before been played live, giving long time fans the chance to hear them performed for the very first time.

The rockers plan to head into the studio after the tour, and Tommy Lee’s side project Methods Of Mayhem will also begin work on new material this fall. According to NME