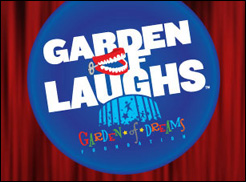 NEW YORK, NY (CelebrityAccess) — MSG Entertainment and The Garden of Dreams Foundation revealed that their sold sold-out comedy event, Garden of Laughs, raised nearly $1.4 million to aid the Foundation’s efforts to benefit needy children, making it the most successful fundraiser in Garden of Dreams’ history.

Garden of Laughs, which took place on Saturday, March 28 at The Theater at Madison Square Garden, featured stand-up sets from comedy stars Lewis Black, Bill Burr, Dane Cook, Billy Gardell and John Oliver. Comedian JB Smoove, also scheduled to appear, had a death in the family and could not attend. The event was hosted by Steve Schirripa and included a collection of esteemed entertainers and sports icons serving as celebrity presenters: Will Arnett, Dominic Chianese, Chad Coleman, Gerry Cooney, Victor Cruz, Michael J. Fox, Glenn Frey, Rod Gilbert, Whoopi Goldberg, Adam Graves, Adam Horovitz, Darryl McDaniels, Theo Rossi, Tony Sirico and Ben Stiller. As he was for the first edition in 2013, Rory Rosegarten was the Executive Producer of this year’s Garden of Laughs.

“The 2015 Garden of Laughs was a hugely successful event and memorable night of comedy – all to benefit children of the tri-state area,” said Barry Watkins, chairman of the Garden of Dreams Foundation. “We are extremely grateful for the support we received from the comedians and celebrity presenters who donated their time and talent. We also want to thank their managers, along with sponsors, donors and every fan that purchased a ticket. Garden of Laughs demonstrated once again how we can use the unique power of our company to raise awareness and money so the Foundation can continue to assist children facing obstacles.”

The Garden of Dreams Foundation is a non-profit organization that works with The Madison Square Garden Company to leverage MSG properties – including MSG Entertainment, the Knicks, Rangers, Liberty and MSG Networks – to benefit children facing obstacles such as homelessness, extreme poverty, illness and foster care. Since its inception in 2006, Garden of Dreams has created programs and experiences for more than 250,000 children and their families. – Staff Writers