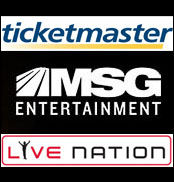 BETHPAGE, NY (CelebrityAccess MediaWire) — The assumption that Cablevision’s Madison Square Garden was changing over from Ticketmaster to Live Nation for their ticketing needs was false.

The following statement clarification with regard to Ticketmaster was issued by Cablevision Chief Executive and Madison Square Garden Chairman James L. Dolan:

“Madison Square Garden has enjoyed a long and mutually beneficial relationship with Ticketmaster. We have been in conversations and expect to extend that relationship and we have no current plans to do anything otherwise.”

Part of the Cablevision empire, MSG owns and operates a string of major venues in several major markets, including New York and Chicago, where the operate a number of high profile venues such as Madison Square Garden, Radio City Music Hall, the Chicago Theatre and the Beacon Theatre. They have also announced that they are getting into the festival business with a major new festival in the works for the northeast next summer.

Ticketmaster, which was spun off from Barry Diller's IAC/Interactive Corp in August, has been on the defensive against Live Nation in recent months and in what appears to have been an effort to catch up with Live Nation's strategy, Ticketmaster was negotiating with Cablevision to form a partnership to acquire a 49% stake in AEG. According to Dow Jones News however, the talks have recently fallen apart, leaving Ticketmaster at square one.

But for now Ticketmaster is still the ticket market for MSG.- CelebrityAccess Staff Writers