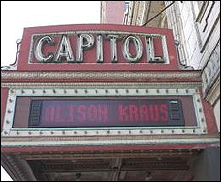 WHEELING, West Virginia (CelebrityAccess MediaWire) — The new owners of the Capitol Music Hall are moving quickly to realize their plans for the historic venue, with hopes of re-opening the doors as soon as possible. Unfortunately, the realities of building fire codes may prove a hindrance.

According to a report in The Intelligencer, the trio of entrepreneurs who are purchasing the property from Live Nation hope to open the Hall in October but an assessment paid for by the Wheeling National Heritage Area Corporation that had been made when the town of Wheeling was considering purchasing the hall showed that renovations would be required to bring the theater up to current fire code.

"Our assessment shows that it would be better for the Capitol to be closed while repairs are being performed, and that those repairs will take a minimum of six months to complete," said Hydie Friend, executive director of the WNHAC told The Intelligencer.

The fire code issues aren't exactly news. Live Nation had closed the theater in May due to 23 fire code violations discovered by the Wheeling Fire Dept., including a lack of a sprinkler system.

Manny Velez, one of the three new owners of the theater has previously condeded that upgrades do need to be made to the venue, including upgrades to the fire extinguishers and other safety equipment, but he doesn't see the problems as sufficient to prevent them from re-opening the theater for October. Velez and his partners the Childers met with city officials on Wednesday but according to Velez, its' "too early to comment about how the code violations will be addressed." The Intelligencer reported. – CelebrityAccess Staff Writers