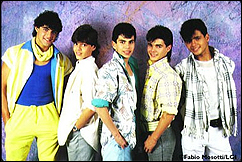 Epic Records/Sony BMG US-Latin join Menudo Entertainment to recreate the all-boy singing group, Menudo. Epic Records has been named the official record label and will sign the new Menudo members, once selected, to a recording contract with the intent of reinstating the group as the newest Latin pop sensation and launching them to a new generation of music fans.

MTV and Reveille (producer of "Ugly Betty," "Nashville Star," "The Office" and "The Biggest Loser") will co-produce 10 half hour episodes highlighting the extensive search for the next members of Menudo and the formation of the new band. The show will debut on MTV in fall 2007. This is the third television collaboration between MTV and Reveille.

"The Menudo brand has attracted a stellar group of partners to date, recently joined by Epic Records, MTV and Reveille. The journey to find the next international all-boy singing sensation has just begun," says Jerry Brenner, Menudo Entertainment LLC principal.

"Indisputably, the biggest brand in Latin pop music over the last 30 years is Menudo, said Charlie Walk, president of Epic Records.
'We will now empower the public to help define the Menudo brand today through various platforms and our partners with one common goal; to entertain audiences around the world with great music."

"Sony BMG US-Latin has been involved with Menudo since 1983," said Kevin Lawrie, president, Latin Region, "and we are proud to be a part of introducing the concept to a whole new generation of Menudo fans."

"Our goal is to re-create the energy and excitement of the original Menudo that swept the world with its unique sound," said Ben Silverman, founder and CEO of Reveille. "By working closely with Epic Records and MTV, we will produce a unique television reality program that follows the search for the next band members and appeals to audiences across the globe."

"MTV has the ability to reach and connect with more young people on more screens than anyone else," said Christina Norman, president, MTV. "As the leader in creating fresh content that lives across multiple platforms, the Menudo project will fuel unique online, on-air and wireless opportunities for MTV and the newly launched MTV Tr3s that will deepen our connection to our viewers and introduce a new generation to one of the biggest names in Latino and American music."

Other previously announced partners in the search to bring back Menudo include Yahoo as the online partner and Gibson as the official musical instrument partner.

"Menudo was always the benchmark for a successful vocal group," said Menudo co-manager Johnny Wright. "Their fans were diverse and worldwide. I've been blessed to have been involved with some of the biggest vocal groups of all time — Backstreet Boys, *NSYNC, New Kids on the Block and Boys II Men. And now with Menudo, I come full circle. I look forward to once again watching the new Menudo captivate a new generation of fans and continue their legacy."

The search to discover the teenage boy group, ages 15-19, will reach out to potential Menudo members in both English and Spanish languages. Menudo Entertainment will conduct live auditions at targeted markets throughout the US and Puerto Rico. The first audition was held at The Coliseo in San Juan, Puerto Rico on October 21. The auditions will start in the U.S. in early 2007 and visit cities including Los Angeles and Orlando among others. Open microphone tryouts held at various festivals including New York City's Puerto Rican Day Parade and Great Adventure have discovered talented young boys who will compete in the formal auditions. –Bob Grossweiner and Jane Cohen