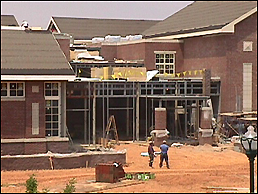 The newly built BlackRock Center for the Arts in Germantown, Maryland is staging
its very first concerts for its outdoor concert series, which runs July 10 – August 31.
It will stage its grand opening in October.

"The concert series is the first of many great arts experiences that BlackRock will
bring to Montgomery County and the surrounding community in
the coming months," said Interim General Manager Marilyn Balcombe.

"With this diverse group of musicians, there will be something that appeals to
everyone," said Balcombe.

The BlackRock Center for the Arts, a 34,000 square foot facility, will include
theaters for the performing arts, an exhibition gallery, a
children's art and activity studio, outdoor performance space and educational studios
for art, dance, music and literature.