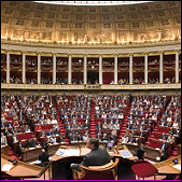 PARIS (VIP-NEWS) — Following the French National Assembly's shock rejection of the "Creation and Internet" law proposal, the government has already confirmed its intention to re-submit the bill to a vote.

The law would have implemented the three-strikes scheme under which an independent administrative authority – called Hadopi – would be entitled to collect infringers' data from their ISPs and to ultimately have their Internet access cut after two warnings.

The government said the bill will be submitted to a new vote by both the Senate and the Assembly after the Easter holidays, without giving exact dates.

A small turnout, resulting in a 21 to 15 vote against on April 9th has prompted claims of dirty tricks. But some deputies in the Assembly voted against the measure because it contained a clause not approved in the previous April 2 vote, whereby infringers would have to pay for their Internet access even after they had been cut off.

The rejection of the law by the Assembly has shocked the music industry and revived memories of a vote in December 2005, during the debates on copyright law DADVSI.

Parts of the bill focused on peer-to-peer file-sharing and some deputies managed to get an amendment adopted opening the way to a 'global license' scheme, whereby a levy on broadband access would make P2P activity legal and compensate rights holders.

The amendment was withdrawn from the final text despite strong backing inside the Assembly and beyond.

"Unfortunately, lessons from the past have been useless, which is a great frustration for creators who are each day more penalized and despoiled," said French songwriters and publishers society Sacem in a statement, calling the government and parliamentarians to act quickly to put an end to the "major deterioration of authors' revenues."

Independent labels body UPFI stated, "It is more than ever urgent that the [three-strikes scheme] be implemented with the shortest delay." According to Billboard