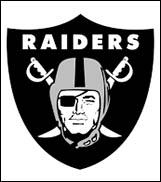 PHOENIX, AZ (CelebrityAccess) — On Monday, the NFL voted to approve a proposed move by the Raiders from their current home in Oakland to Las Vegas.

According to the New York Times, NFL team owners voted overwhelming, 31-to-1 to approve the move, enticed by the city's booming tourist economy and by promises of unprecedented public subsidies to construct a new stadium for the team.

The proposed stadium would cost nearly $2 billion and would include $750 million in public financing. Additional funding would come via a $600 million loan from Bank of America to the team, as well as $200 million from the league and revenue from naming rights for the stadium and other similar sponsorship deals.

The Raiders are likely to begin playing there as soon as 2019, with plans to move into a completed stadium there in 2020. This means that the team is likely left to play for two more seasons in front of jilted fans in Oakland before they decamp to the much smaller market Las Vegas offers.

The decision by the team's owners to allow the Raiders to relocate marks a sea change in attitudes about the league's presence in Las Vegas, after years of concerns that having a team in the gambling mecca would lead to players and referees associating with unscrupulous people from the gambling world who may seek to influence the outcome of games for profit.

However, the Raiders move follows the NHL's decision to launch a new franchise, the Golden Knights, who are expected to begin playing hockey in Las Vegas next year and mirrors similar interest by Major League Baseball in Las Vegas franchise. – Staff Writers