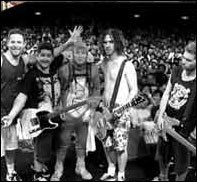 PERU (CelebrityAccess MediaWire) — About 200 riot police showed up at NOFX’s Peru show this past Friday to block the venue entrance and stop the two thousand plus kids from entering. The police would not allow anyone to leave, nor the band’s crew, which were trapped for hours without food or water. NOFX said “they eventually put our equipment in the back of the PA Truck, and then climbed in, along with the opening band "All the Hats" from Argentina, and made an escape.”

The apparent cause of the police action was that the promoter had failed to obtain the proper permits for the large outdoor event, and then was not available to bribe the authorities when they arrived in the afternoon to inform everyone there would be no show. The band also stated on their website that they were “sorry to all the people who hung out for hours and didn't get to see a show, we were very sad to go all the way to Peru por nada. We will do all we can to make it back next year. An extra apology to the people that then were led to believe there would be a show the next afternoon, around the same time we were getting ready to pack and head to the airport to fly to Chile.”

Bass player “Fat Mike” reporting in from Buenos Aires said, “so far this tour has been awesome aside from a few missed flights and food poisoning. The good news is we will be playing the next few shows in Lima, Santiago de Chile, and Guayaquil. The bad news is the shows in Columbia and Venezuela are cancelled because the original organizers lied to us repeatedly (the promoters Cheo in Caracas and Sergio in Medellin and not to blame). In fact the club Santiago booked us in Bogata had no idea that any show existed. We apologize to all the kids who bought tickets in those countries. Hopefully you all can get your money back. For sure, we are not getting our $25,000 back that we spent on plane tickets. Had the promoters in those two countries actually bought us the tickets they said they had bought; we wouldn't be having these problems. Anyway, I'm not gonna go into all the details of how we're getting screwed. All I know is that every other show in South America has been super cool and we're having a great fucking time. Thanks to all the kids who are showing up and throwing joints at us. See ya round, Fat Mike”