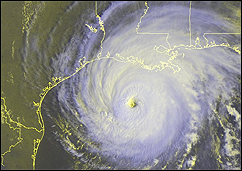 (CelebrityAccess MediaWire) — As the entire Gulf Coast cringes at the thought of another storm, Hurricane Rita is barreling down on our friends in the area. And amid the post-Katrina clean-up processes still going on in the region, no one is taking this one lightly.

All shows in the southeastern corner of Texas have reportedly been canned in advance, up through at least the 25th of September, with promoters and talent buyers taking no chances on the weekend. Willie Bennett of the Crossroads Music Festival 2005 in Hearne, Texas, informed CelebrityAccess that the festival, scheduled for Saturday, September 24th, featuring Gary Allan, Kevin Fowler and Billy Joe Shaver has been rescheduled for Sunday, November 6th. Tickets already purchased for this
event will be honored at the make-up date.

Most in the area have been sent running, evacuating to Dallas, San Antonio and Austin. Austin, which is about 40 miles from the projected path of the storm, is packed for the weekend’s Austin City Limits Festival.

Just as acts are getting set to take the stage at Zilker Park tonight, the festival’s website proudly states, “The show is on,” as the storm is moving further east than first predicted.

The message on the site shows genuine relief on the part of the organizers, and the stress that went into tracking the storm: “Thank you for hanging in there with us while we've watched the progress of Hurricane Rita. The meteorologists we have consulted with advised us to wait until 48 hours before expected landfall in order to get the most accurate look at the storm's track.”

At press time, all of Clear Channel’s Houston offices were being evacuated, including staff at venues in the area.

An auto-reply set by Jason Lustberg at the Verizon Wireless Theater in Houston simply read, “Most likely out of the office for the remainder of the week…attempting to escape the wrath of Rita…”

Robert Devine of Maximus Talent wasn’t going to take any chances either: “We will have a very bad storm with 40 miles winds so we are renting movies and staying home.”

As the slow moving storm makes landfall, we wish those in the affected regions the best of luck.