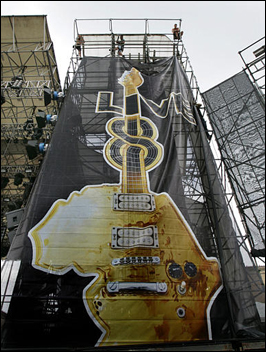 The Philadelphia concert boasts Russell Simmons as one of its producers and A-list acts such as Destiny's Child and Alicia Keys — a far cry from 1985's Live Aid concerts, which were criticized by some for being "too white."

While it's fair to say few musicians of any race have made Africa's struggles their cause, those who have leapt to action fastest and loudest are white rockers.

Coldplay frontman Chris Martin sports Band-Aids on his fingers to call attention to African trade issues. Bono, a dedicated lobbyist for the Africa's poor and AIDS-stricken, is touted as a possible Nobel Peace Prize winner. And Bob Geldof, organizer of the original Live Aid, is the driving force behind Live 8 — the show that aims to highlight the continent's problems before the G-8, the Group of Eight major industrial nations, meet in Scotland.

Yet over the years, the critical issues faced by African nations — AIDS, war and famine — have failed to galvanize the rap or R&B community to start a major movement on its own.

"That's something that I don't understand — I couldn't tell you why," said black rocker Lenny Kravitz in a recent interview with The Associated Press.

Simmons counters that the hip-hop community is very charitable — and will become more involved with Africa over time.

"Everyone who opens their mouth to give should be commended," Simmons said of the artists involved in Live 8.

Two of rap's biggest names recently released videos that feature the continent in starkly different ways. Kanye West's "Diamonds" is a haunting clip featuring children laboring in diamond mines, while Ludacris' jovial "Pimpin' All Over The World" shows sexy African women along with the equally stunning landscape of some of Africa's countries.

But videos or songs that link black artists to Africa are rare finds in hip-hop, unless it's a passing reference to an exotic woman or locale. And except for hip-hop's brief obsession with Afrocentric themes in the late '80s and early '90s, political statements of any kind are uncommon, let alone talk of Africa.

"You don't find that much African-American conscious music out in the airwaves today. It's not what we seemed to be concerned with — not me, but we as a people," Kravitz said. "We seem to be always be thinking about ourselves and what we've got and how rich we are and how many cars and women we have, and that's mind-blowing to me."

Simmons disagrees, noting his Hip-Hop Action Summit Network over the past few years has tapped rappers to get young urban communities aware of their political and economic power. And fellow hip-hop mogul P. Diddy spent much of the last year trying to get young people out to vote; the year before that, he ran the New York City marathon to raise money for charity.

But as descendants of Africa, should black musicians be leading the drive to help solve Africa's woes?

"Africa, is it something that they need to turn their attention to? Need to?" Simmons asks rhetorically. "Well, whoever wants to."

At least a few black musicians have gotten involved in Africa's plight. It was three black men — Quincy Jones, Lionel Richie and Michael Jackson (yes, Michael Jackson) — who organized the "We Are The World" all-star single. Others who have been active in African issues over the years include Stevie Wonder and Harry Belafonte. Black performers also supported the boycott of South Africa during its apartheid years. And recently Keys has been active in efforts to get medicines to AIDS sufferers in Africa.

"I think that people like Bono probably did a little more research about Africa," he said. "And they are also in a position internationally to influence a lot of people because of their fame and there ability to make contacts with other people of similar stature and means."

Beyonce agrees that more education about Africa is needed — not only for black musicians, but for people in general.

"People don't really have access to see what's going on over there. That's why it's important for someone to bring the awareness and that's why we're happy to do that and to start that," she said of Destiny's Child's involvement in Live 8. "I don't think it's an African-American (problem); I think it's an American thing because of the news. Maybe that's why, I don't know. Or maybe we're just spoiled."

Live 8 Artists to Play for Free, Get Gifts

PHILADELPHIA (AP) — Live 8 performers are playing for free, but local organizers plan to shower the celebrities with a Hugo Boss duffel bag loaded with high-fashion trinkets valued at about $3,000.

"We want this to be a thank-you to the celebrities who are giving up their time and energies," said Nicole Cashman, whose firm was tapped by Larry Magid's Electric Factory Concerts to put the bags together.

One ethicist said there is a disconnect in the fact that the rich gifts are being offered at a concert whose aim is bringing attention to poverty in Africa.

Another ethics expert said he wonders why the companies who donated the gifts wouldn't just give the money to charity.

"There is nothing stopping the businesses from taking a stand, saying, `No, we are going to take this money, and we are going to give it to the charity,'" said Rushworth M. Kidder, president of the Institute for Global Ethics in Camden, Maine.