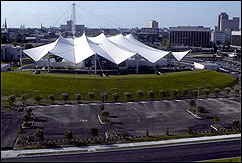 (CelebrityAccess MediaWire) — The city of Portsmouth, Virginia, announced earlier this week that it has finally completed a legal settlement with the two companies that designed and built the nTelos Pavilion roof. The sides agreed upon a $3 million payout to cover replacement costs and other damages, after the material originally used in construction shredded during Hurricane Isabel in 2003.

Under a settlement reached Tuesday, Buro Happold Consulting Engineers will pay the city $1.3 million, and Birdair Inc. will pay $1.35 million. Insurance carriers and architects will add an additional $100,000 to the deal, on top of the $250,000 paid last year.

The settlement of the two-year lawsuit comes a week before the case was set to go to trial.

“This is probably as much as we could have possibly hoped for,” City Attorney Tim Oksman told the Virginian-Pilot. “It’s a win for our citizens.”

The venue also announced other good news at the same time, including revealing that nTelos will continue its sponsorship deal of the shed for another three years, and the first 9 concerts scheduled by new venue manager Integrated Management Company.

The scheduled concerts include appearances by James Brown, Ashlee Simpson and Lyle Lovett.

Ken MacDonald, a co-president of the new management company, said it planned to produce at least 25 shows this year, with several others to be announced in the coming weeks.

“People are going to say it’s a new beginning,” MacDonald said. “And we’ll convince them. This facility … is really a jewel that should not be taken for granted.”

The facility will open for the season on May 13 with a performance by local blues singer Ruth Brown with Bo Diddley in the Virginia Arts Festival’s inaugural Ruth Brown Blues Festival. –by CelebrityAccess Staff Writers