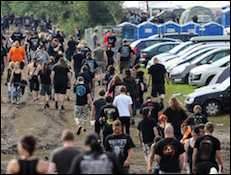 WACKEN, Germany (VIP-News) — The 2012 Wacken Open Air Festival is now over, but sad news to report as the organizers of the event confirm that one concertgoer has been pronounced dead after what appears to be an accidental carbon monoxide poisoning on the festival’s campgrounds.

Unfortunately, we have sad news: We were informed by the German Red Cross that there has been a death at the Wacken Open Air 2012. We are shocked and send our condolences to family and friends of the deceased. Final details are not known at this point. You will find the official press release from the emergency medical service below.

The emergency medical service released a statement as well:

At this year’s Wacken Open Air festival, a tragic accident took place on the camping ground. As far as is known now, a festival guest laid down on canvas-covered trailer, where he fell asleep. A power generator was also located underneath the cover and running, filling the space between trailer and canvas with poisonous carbon monoxide. As it appears, the person on the trailer was breathing in this gas and consequently died.
After approximately two hours, the friends of the deceased went looking and discovered the lifeless body under the canvas on the trailer. Emergency services and doctor were called immediately, but couldn’t successfully resuscitate the person. The State Attorney has started investigations.