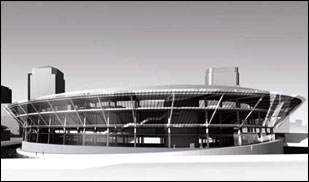 KANSAS CITY, MO (CelebrityAccess MediaWire) — One of the three planned venues in the Kansas City area has been abandoned. The suburb of Olathe has discarded its pursuit for a 9,000-seat arena in its $265 million retail project, leaving just the KC suburb of Overland Park to compete with the city’s downtown Sprint Center.

“We tried to aim high and grab something out there, but in the final analysis our fiduciary responsibility is to our taxpayers,” Mayor Michael Copeland said to the Kansas City Star. “We just got to the point where we just decided we didn't want to take that risk” of including an arena in the project, he said. “We didn't want to risk our credit rating and put undue financial risk on our taxpayers.”

The city council approved an agreement that would allow developers to proceed with plans for the $265 million retail project that would depend on a mix of private, state and local financing, but would not include an arena.

The Kansas City suburb of Overland Park is still planning an 8,000-seat arena and entertainment district. The city is currently conducting studies to determine whether it’s viable.

Overland Park Mayor Ed Eilert has said his city’s $150 million venue would not compete with the Sprint Center. The proposed facility, which the city hopes will attract minor league basketball and hockey teams, is still moving forward.

The $250 million Sprint Center is expected to replace the downtown Kemper Arena as the city’s main venue. AEG has added $50 million to the 20,000-seat venue, and will operate the building. –by CelebrityAccess Staff Writers