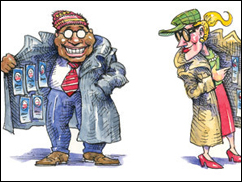 This is hysterical! They're trying to SHAME scalpers into doing the right thing!


While they're at it, why don't they tell heroin addicts they're despicable parasites and file-traders they're ruining music. The effort would be just as successful.


One thing you've got to know about politicians…they're CLUELESS!


Obama wins the election by employing young 'uns who can slice and dice data and Charles Schumer, a tool of the bankers who are both underwriting this concert and overpaying to attend it, is shocked, positively SHOCKED at the inequity!


Let's start at the beginning. Madison Square Garden is a small hall in America's biggest market. Staples Center has thousands more seats. Stuff sells out at MSG that doesn't do a full house anywhere else. Who in their right mind didn't know this would be a scalper's field day?


This is Christmas, Thanksgiving and your personal birthday wrapped into one. This is the kind of event resellers DREAM about! This is like trying to fight Al Qaeda by telling them they're doing bad things. Huh? Today you fight with technology. You don't go to the media and tell people who don't care and are not paying attention to stop.


And do these same politicians ever look themselves in the eye and ask these questions when the scalpers lobby them to ban paperless? Yup, all those grannies bought 12/12/12 tickets for their families, who can't attend, because of soccer games, and now they're forced to get rid of these ducats on StubHub. Please let the eBay company help them out, otherwise they'd be stuck with these tickets and lose money. Thank god there's a resale market!


If this fiasco isn't the number one advertisement for paperless ticketing I don't know what is. But blame the music industry. They like it the way it is. This is how they make a profit. On ticketing fees and scalping your own tickets and…


If we bring in paperless these heritage acts, and it's almost all oldsters on the bill, would have to forfeit seven figures. Yup, these icons of creativity are all about the bucks now. They don't want to leave any money on the table.


So be like the Stones. Overcharge, to try to eliminate the scalping. Then scalp your own tickets too! Ha!


Either sell the tickets at their fair market value or go to paperless. It's an either or situation. Otherwise you've got third parties profiting while the government kicks and screams in ignorance.