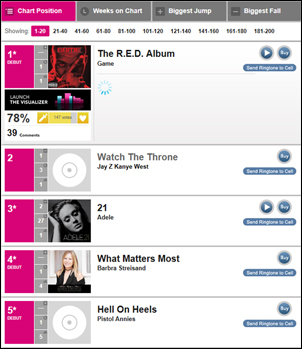 
That’s what Steve Jobs knew that nobody at “Billboard” seems to understand.


Don’t give me formulas, give me reality.


The only thing that counts is listens. Sales are irrelevant. Especially of albums.


But the whole industry is based on albums so they don’t want to throw out the baby with the bathwater, they come up with this inane hybrid chart and then trumpet it as the answer. Once again, the music industry is a step behind, part of the problem, not part of the solution.


Streams only. They represent what people are listening to.


As for sales… They’re tanking. Keeping them alive is like continuing to install FireWire on Macs. It worked, but it’s been superseded by Thunderbolt. Then again, the people making these decisions can’t tell the difference between USB and MP3.


Can someone look to the destination? Can someone admit that streaming has already won and as a result the winners in the music derby might not be the same? Can someone wrap their heads around the fact that the majority of streaming revenues go to rightsholders, and how they divvy it up with their partners is subject to contract?


Industries that satisfy themselves and not their consumers are headed for extinction. We see it over and over again. Whether it be the greedy cab companies or the overpriced hotel industry. They didn’t see Uber and Airbnb coming. But who wants to ride in a filthy cab with a driver on the phone who jolts to a stop? Who wants to stay in a hotel only to discover that the price they were quoted resembles not a whit the final bill they’re tendered?


People haven’t listened to albums from start to finish since the advent of the CD.


Macs don’t come with disk drives. Neither do Chromebooks, which are infiltrating educational institutions, but we’ve got a whole industry based on selling disks no one wants.


Furthermore, hard drives are dying, it’s all about access, and you want me to buy files?


Just round up all the streaming services and give us a ranking. Hell, we don’t even need to know how many listens there were. Just put them in order based purely on that one statistic, with no malarkey involved. None of this crap about track equivalent albums and x number of streams equaling a sale. Huh? What is that? Do you see Netflix telling us how many views equal one DVD?