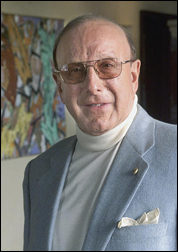 But is he still gonna have his Grammy party?

I donâ€™t know who signed Elton John to MCA, whether we ultimately should give Dick James credit for starting his legendary career, but someone in an inept organization whose label name was essentially unknown in the U.S. was savvy enough to realize Reg Dwight had talent, in spades. He came with his own co-writer, a producer and an arranger. The label didnâ€™t meddle, they just sat back and collected the cash. Sure, Norm Winter deserves credit for breaking Elton in America, but do you really think he wouldnâ€™t have made it anyway? Have you listened to "Your Song"?

This is how it was at the turn of the decade. From the sixties to the seventies. Labels signed talent and then got out of the way. The record company was not much more than a marketing and distribution outlet. Clive Davis says he was a player in this era too, signing Janis Joplin, Santana and making Laura Nyro a star, he takes all the credit. Then how come he never signed anyone close in talent since?

Maybe Patti Smith was just the buzz. For Clive never signed anything so edgy, so innately talented after her. And letâ€™s not forget, Patti was a poet. It was easy to listen to her music and dismiss it. Which most of America did until she covered one of Bruce Springsteenâ€™s songs.

After Patti came a succession of established acts who bitched until they could leave, like Lou Reed, and MOR acts so bland as to be almost faceless, if they werenâ€™t sold on their features.

In retrospect, Barry Manilow looks like a giant. He came at the beginning, before Clive had refined his paradigm. Barry could actually write, even if his initial hit was a cover. A song that Clive changed the title of from "Brandy" to "Mandy". And with that stroke, Clive Davis anointed himself a creative genius, bigger than any act. Clive Davis was suddenly the talent. He made you, and killed you if you didnâ€™t play along. What resulted was a trail of pop hits almost all of which have been completely forgotten.

But in an era when MTV could explode your career and AOR was dying, replaced by Top Forty on FM, suddenly, there was money in pop hits. Or maybe not money, but noticeability! You could trot out chart statistics, which got you ink and TV exposure. All those acts on Warner looked like has-beens in comparison. Didnâ€™t matter that by the fourth quarter Mo had the sales, and the profits. Mo got squeezed out, but not before Donnie Ienner, Cliveâ€™s promotion man, had taken over at Columbia and Charles Koppelman, who idolized Clive, ran the EMI empire in the U.S. Suddenly, the whole business had been rebuilt in Cliveâ€™s image.

Propped up by MTV and CD sales. Both of which declined at the turn of the century. When suddenly music was free and your only hope was to maximize the revenue of a career artist. One whose catalog would pay dividends for decades, unlike any of Cliveâ€™s proteges.

They tried to squeeze Clive out. But he was too smart and too wily. He got his own label, he got revenge.

But they werenâ€™t only squeezing him out because he was aged, but because all those chart statistics didnâ€™t flow to the bottom line. Sales were good, but profits were often abysmal. Some might say the operation was all flash, and no substance.

But Clive hadnâ€™t lost his starmaking ability. He built me-too act Alicia Keys on the back of a James Brown rip-off and regained his power, not only in the eye of the media, which he worked so well, but the BMG operation. Many felt he was poised to gobble up Sony Music. That would be his ultimate triumph, to rule Columbia and Epic once again. Alas, itâ€™s not to be.

Like in the old days, the first time around, when Clive lost his job in the seventies, the person who pulled the trigger was essentially anonymous. How could some nameless, faceless person kill God? Well, Clive just acted like God. In truth, he was just another employee. Simon Cowell might be God.

Simons Cowell and Fuller built a juggernaut. Theyâ€™d make the star, all that would be left would be to fit the two-dimensional figure with material. Thatâ€™s where Clive came in, after being initially reluctant. And just after pronouncing that acts shouldnâ€™t bother to write, he got blown out.

Because it is show business. But itâ€™s the kernel of art that makes it all work. The one genius, the one Bruce Springsteen, energizes everybody about music, it brings people into the stores, generates sales. Lose the true stars, who write and play or sing from the heart as opposed to being manipulated by handlers, and youâ€™ve got a headless, heartless corpse. Otherwise known as todayâ€™s music business. There are people with statistics, like Mariah Carey, but they donâ€™t make you pay attention, at least not to their music. They can be denied. Like all of Cliveâ€™s post-â€™75, Arista era on, productions.

Barry Weiss is sharp. But not as sharp as Clive Calder, who came up in the business with the best producer alive today, Mutt Lange. Clive was a scientist, who specialized in getting the elixir right, all at a cheap price. Barry knows cheap in an era when you must look at all expenses, but heâ€™s more of a traffic cop than a deity.

Clive had a long run. He eluded mandatory retirement. He got away with never anointing a successor. But no one lives forever. He should be able to sleep well at night. But he wonâ€™t. Because of the legacy factor.

Without millions at his disposal, without being able to spin (buy?) the press, Clive will fade out. Itâ€™s not like Clive Davis records will be spun on oldies stationsâ€¦ Hell, does anybody other than an insider talk about David Geffenâ€™s tenure in the record business anymore?

No. But if one does, and focuses on the early period, one can see that Mr. Geffen used his charm on his acts, not the press. He found the best acts, made sure they knew he was on their side, and fought for them, stuck with them, made them stars. Geffen made Joni Mitchell. And Jackson Browne. He built the aforementioned Laura Nyro. He gave the Eagles a deal. If you want a model, go back to that era, before King David got sick of the talent and decided to become the talent himself. An investor, a studio head, a billionaire.

Yes, in reality shepherds of talent are unsung heroes. If you doubt me, go backstage. The hoi polloi donâ€™t want to hang with the manager or the label head, they want to touch the star. Theyâ€™ll sacrifice their bodies, anything to get closer to the person whose music changed their lives. Back when music changed lives, before big time musical acts were known more for their celebrity antics. Itâ€™s a rewarding job midwifing talent. One that oftentimes comes with riches. But itâ€™s sans the spotlight. All the great record men stood out of the spotlight. From John Hammond to Mo Ostin. Hell, how much publicity does Coran Capshaw get? These people realize that itâ€™s about the act. With Clive Davis it ceased to be about the act.

Is Kelly Clarkson happy today? Elated, Iâ€™d think. The roadblock is gone. Maybe sheâ€™s only a mildly talented songwriter, but now she can do it her way. Every artist wants to do it his way. It was Clive who stood against this. Clive who refused to release records. The enemy is now gone.

The major labels have lost their luster. By wanting to reside in the twentieth century, by playing by old rules. By wanting instant success, instant riches, at a high price to the consumer. But that era is never coming back.

Today weâ€™re closing the door on the twentieth century. Today weâ€™re drawing a line in the sand, that acts last, not executives. The future of this business will be based on artistry. The music will come before commerce. It has to. The old tricks of scarcity and publicity used to drive the old mogulsâ€™ priorities no longer work in the new world. There will be a new set of moguls. Who know this. No one from the old world has evidenced an ability to adapt.

Richard Sanders is not ascending to the throne. But, at least, unlike Charles Goldstuck, he didnâ€™t get completely blown out. Like that old Blondie record, Charles Goldstuck is going to fade away, but heâ€™s not going to radiate. He doesnâ€™t bring enough to the party. He was the sycophant to a deposed king.

But now thereâ€™s a new king. Nobody lives forever. Every reign comes to an end.

"The King Is Dead"
Elton John