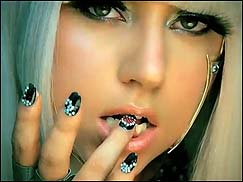 The star here was Lady Gaga.

She did all the top notch shows hyping her album which entered at the top of the chart and promptly sank. The hype is over. She can finally make good on her promise to do Stern's program.

And I'd love to tell you the chitchat was brilliant. That Gaga is charming and wise beyond her years, but the interview segments superseded the usual hype by those who are selling advertising and don't really care about content, but they were not riveting, it was for fans and looky-loos.

And then Gaga started to sing.

It'd stop you in your tracks if you were moving.

Me? I was parked at the 76 Station. I couldn't get out of the car. I was hooked.

That's the power of radio.

You can go on YouTube and see some clips, but you will not get the same effect. Because music is something you hear, not something you see.

Lady Gaga sits down at the Steinway and starts to sing and the New York accent falls away and you're immediately closed. This woman has talent.

And it's not only the voice, the changes work and the words too.

What's up with all the outfits and all the posing and all the dance music dreck on the recordings?

She doesn't need anything else. The music is enough. And it's staggering when that's the one thing most people can't do, sing and write.

And listening here, you definitely believe that despite all the glamour and attention, Lady Gaga was never one of the cool kids.

She said she was a fan of the Grateful Dead. Huh? Aren't you supposed to immediately lose your cred if you admit this, unless you still go to Phish shows and play Hacky Sack?

You see her mother cut her long flowing hair that was getting tangled at the ends, starting to resemble dreads. At night. When Gaga was asleep.

That's true alienation. When you're not even accepted in your own home.

And it's no secret that Gaga is speaking to the alienated and disenfranchised, but when you hear her story, when she's relaxed, when she's not posing, you realize it's not an act, that's who she is. And that's what draws fans to her. Because how many of us are really members of the cool club after all?

So it's more than the music. And it wasn't created in a board room, there's no focus group involved. It's just her, directly from her heart to yours.

And there was one great moment when she's talking about her manager Troy, how he fights for her to be her, doesn't interfere with her creative process, and Howard asks Troy to step up to the mic and explain how he found her, how he was confounded by Gaga's talent, and Troy refused! Reminded me of being at the IEBA conference a couple of years back and they're giving lifetime achievement awards to Alice Cooper and his manager Shep Gordon and Shep steps up to the mic and says he knows where his place is, who's the star, and immediately steps back and says "COOP!"

What a dramatic change from the corporate b.s. Where suits at record companies tell the acts what to be. They specialize in saying no as opposed to yes. The label is the plantation and the artists are the slaves. They fought for their freedom decades ago, but so much money got involved that the owners took back the power, they couldn't take the risk.

But we're all about the risk. We want to see our artists on the high wire, doing death-defying acts.

If only Lady Gaga would give up the shenanigans, the meat dress and the shoes and the outfits and the posing, because in her case they're unnecessary, the music is enough.

But you can tell she doesn't believe this. Like her buddy Elton John, all the trappings are there to cover up a deep insecurity, a belief that maybe she's just not good enough. Not attractive like a movie star, not as talented as who is on the radio.

But when you hear Gaga sing on Howard's show you know why she's the biggest star in the world.

Can she stay there?

It's extremely difficult in today's niche oriented hellzapoppin' world. But the way you do it is to ignore the naysayers, discard the advice and follow your own path.

But I'm gonna give some advice anyway.

Stefani! Just lock yourself up in your room and write those songs and record 'em alone at the piano without the trappings and you'll become the legend people believe you are but have not yet become.

Gaga was that good on Stern. It wasn't quite like seeing the Beatles on "Ed Sullivan", but we've been fed b.s. for so long that she beamed like a ray of light right through the dashboard.

And my favorite part was her speaking about recording with Mutt Lange, who said he had his friend Brian add some guitar parts to the track. Mutt didn't say which Brian, it turned out to be May, of Queen, from which Gaga took her name.

When Gaga found out, she swooned inside.

She's a fan. She's not speaking down to us, she's one of us.

And that's why they love her.

And why you'll love her too when you hear this show.

Yes, Howard was imperfect, but no one can get the real story but him. If for no other reason than he gives talent enough time to stretch out and relax.

And Howard's act is based on the same thing as Gaga's. Being a geeky outsider needing to prove to the rest of the world his worth.

And you don't get there by declaring yourself a winner, you do it through hard work.

Really, I'm listening to Gaga talk and it's interesting but I'm not that impressed, she doesn't deserve the accolades. Then she starts to sing and she's undeniable.

That's the power of music. The trappings are irrelevant, it's only about the song and the performance.

And that's hard to find in the entertainment landscape today.