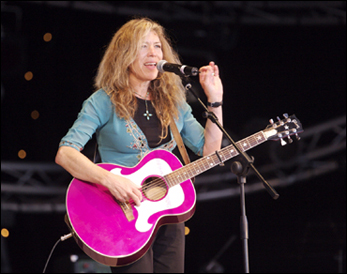 GIVE YOUR MUSIC AWAY!

Please, if you’re an indie artist, if you’re not signed to a major label (which probably won’t allow you to do this), PLEASE put up downloadable MP3s on your homepage. Put all your tracks on MySpace. It’s almost impossible to be recognized, to get any attention in this overloaded world, and you want people to pay first, in order to check your music out?

If someone’s a fan, they’ll give you ALL their money! They’ll buy the CD to display in their home, even if they never fire up their CD player anymore. They’ll buy merch to support you, to show how much they love you. And they’ll buy music for their friends, trying to share the joy with them! It all starts with the music, but you’ve got to make the music AVAILABLE!

I got this CD from Ashley Cleveland. Even though her husband has the last name Greenberg, Ashley is a Christian, and after losing her deal with Atlantic, she started making religious music. Not that religious music sounds like it used to, but I’m not big on being preached to. And do I really want to play an album entitled "God Don’t Never Change"? I’m more interested in questioning whether he exists, not whether fundamentalists are refusing to reinterpret his word, as passed down by a flock who never saw his human manifestation walk across water.

If I didn’t love so much of Ashley’s work, I wouldn’t have played this album. But when I did, I was stunned! This was ROCK AND ROLL!

I don’t mean let’s get fucked up and burn down the house music, I’m just speaking of music that speaks to your genitalia as well as your heart. Rock and roll’s got soul. The instrumentation takes you away from the world you’re presently inhabiting, whisking you to a virtual bar, where you’re on your way up, where your body can’t help but MOVE!

Kenny Greenberg is an ace guitarist. And his fingerprints are all over this album. Not only as a fleet-fingered ace, but as producer. The recording may be digital, but it’s got a warmth, it BREATHES!

One of my favorite records EVER is Ry Cooder’s "Into The Purple Valley". It’s a PROJECT record. A veritable CONCEPT! A rerecording of Dust Bowl era tunes which fit not at all into the early seventies landscape, but end up sounding timeless today. "God Don’t Never Change" is a similar record. Ashley and Kenny heard a public radio broadcast about old black gospel music and said to themselves, LET’S MAKE AN ALBUM OF THIS!

You see this idea doesn’t work on paper, you can’t even describe it, you’ve got to HEAR IT! A musician can hear the finished product before he’s even laid down a lick. That’s the TALENT! And what Ashley and Kenny envisioned ROCKS!

Is it made for Top Forty?

Is it made for Country?

Is it even made for CHRISTIAN?

I don’t see ANY format as being appropriate. "God Don’t Never Change" exists in its own rarified air. It’s something that’s sold by word of mouth. But Ashley and Kenny are stopping it dead in its tracks, by not allowing people to HEAR IT!

You can only hear samples on Ashley’s site. And what about that report today that said thirty second samples don’t close people?

But forget the big corporations, what about STRUGGLING musicians?

If something is good, if people like it, they’ll tell everybody they know about it. Because there are very few good things out there!

"God Don’t Never Change" is good. Play the opening track, "My God Called Me This Morning". But first play "Samson and Delilah". Which is like a Christian version of Rod Stewart’s "Cut Across Shorty", but with more RESONANCE, more AIR!

The future isn’t radio, it’s not television. It’s one to one. It’s from me to you, kind of like that "BusinessWeek" story about Apple and Google allowing customers to trade apps.

The key is to build the infrastructure, to get the product in people’s hands. Focusing on money first ALWAYS HOLDS YOU BACK!