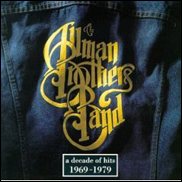 That's Doobie and Allman to you.


The Doobies get a bad rap. That's what a string of Top Forty hits
will do to you. But to hear Tom Johnston's pure voice is akin to
being drenched in honey and licked clean. You feel both alive and
renewed!


Although traffic has decreased in L.A. since the recession, I insisted
we leave for the Greek extremely early, I didn't want to miss a note.
And when we emerged from Rena's office we found an almost totally
empty venue with an eight piece band playing in the waning sunlight.
It was almost exactly seven o'clock. Needing to fit in a full four
hours of music before the eleven o'clock curfew, it was necessary to
start then, before most of the fashionably late boomer audience had
left their homes.

But as time wore on, the seats filled and the band from Santa Cruz won
them over. That's what professionals do. They assess the situation
and instead of going home, they draw on decades of experience and will
the audience to love them.


They did the hits. Everything from "Black Water" to "China Grove" to
"Listen To The Music". The level of musicianship was amazing. I knew
Tom Johnston could sing, but who knew he could play? Never mind
extract that classic Doobies sound from his axe. Not that it was only
Tom, Patrick Simmons' hair may be gray, but he's lost not a step, and
John McFee looks younger than yesterday, when he played the licks in
Clover, he whipped his bow over his violin like a virtuoso. But the
highlight was their rendition of "Nobody", from the very first Doobies
album, both of which, album and single, were not hits. But when I got
the boxed set, this formerly hidden cut was a revelation. Tom said
this was the first track they ever recorded they were satisfied with.
Never underestimate the power of Ted Templeman.


And by time the Doobies were done, it was dark. We retreated to
Rena's office, whereupon I found that Tom Petty would not be repeating
his appearance from the night before. We were going to get Ziggy
Marley. But I was not told the Allmans were going to bring out the
Conan O'Brien horns, the remnants of Southside Johnny's backup band
from way back when.


To say the Allmans were stunning would be understating the case. They
started at 10, and then kept tightening the screws, going towards 11,
they were a well-oiled machine running on all cylinders.


I wish young 'uns could come see the Allmans. Because they'd
understand it's about being a musician. Stardom is fleeting at best.
Sure, a few lucky ones can whore themselves out as special guests on
sitcoms and maybe replace the star in a Broadway show, but that's
about eking out a living, that's got nothing to do with music.

Music is something you feel in your heart. You practice when no one
is paying attention. You roll in a van, taking your life in your
hands, not only from the road, but your bandmates, who are about to
ignite from so much close contact and so little remuneration. But if
you're good, and lucky, you break through.


The Allman Brothers were the biggest band of the early seventies.
Anointed by Bill Graham, closing the last night of the Fillmore, they
didn't peak until after Duane's death, with "Brothers and Sisters" in
'73. "Ramblin' Man" emanated from that speaker in the dash every
day. They headlined Watkins Glen and then imploded. But miraculously
reassembled.

Forget the deals with Epic and Arista. The Allmans are no longer
about records. The Allmans are about playing! Utility player Warren
Haynes is more valuable than Derek Jeter and allows Derek Trucks to
shine. Gregg Allman is the linchpin, and Butch, Derek and Marc
Quinones, the percussionist between them, hold down the bottom along
with bassist Oteil Burbridge. And what a bottom it is!


The Allmans are truly a family. If you're inside enough, you get to
watch from the stage. And if you get in the way, a roadie doesn't
brush you aside, he whispers that you're blocking his operation and
gently asks you to move. And what you end up with is an experience of
being in the music. To experience the percussion from the back line
of the Allmans is to be part of a tribal rite. Butch is like a
metronome, locked in the beat. Jaimoe is in a trance, hitting every
note. And in between them, Marc hits a range of percussion
instruments that add accents you can't predict, but sound just right.
And when the audience roars in return, the love puts a smile on the
band's faces. The adoration isn't enough, but it helps. Makes the
twenty two hours off stage tolerable.

That's what a musician does…play! Then there's the travel, the
drinking and drugging, the women and the camaraderie, the jokes, the
cards, the laughter. Rock and roll is the circus without the seamy
carney underside. Which is why everybody wanted to run away and join
way back when. You wanted to be closer…to this lifestyle, to the
music!

But to a great extent, that's gone. The "artists" want fame. The
promoter is playing to Wall Street, the fan is a pawn in the game.
The music is just an excuse to charge customers up the yin-yang. So
when you see the pure unadulterated essence, it leaves a mark.


Nobody in the band was mugging. Warren and Derek weren't trying to
outshine each other, they were working in harmony! Watching Gregg
walk his fingers over the keyboard connected you to generations past,
musicians playing for the love of it, doing their job, to both
entertain themselves and the audience.

Music when done right should not be a job. If you're working at it,
if you're thinking you need a vacation, you're doing it wrong. Music
is like sex, it never gets old. Sure, there's surrounding b.s., the
wooing, the failures, but you're married to the rituals, they pay
dividends.

"I Shot The Sheriff" with Ziggy was a winner. Susan Tedeschi wailed.
I loved hearing the horns on a rendition of Van Morrison's "Into The
Mystic". But it was those songs of yore that truly resonated…


"Trouble No More", from the very first album, which I went back and
bought after being infected by "Idlewild South" and "Fillmore East".
It's got the original "Whipping Post", it's even more solid than the
second record.

And "Revival"… People, can you feel it, love is everywhere! But
not in Hepburn Hall at Middlebury College. I don't ever remember a
girl in Dave McCormick's room that January when he dropped the needle
on that album every single night, as we got high and watched the
plastic from the burning zilch drop into the waiting bucket.


And, of course, "In Memory Of Elizabeth Reed", waltzing like a drug
trance over Griffith Park. The guitars synchronously locked like
Derek and Warren shared the same brain…

Gregg ultimately strapped on an acoustic and performed "Melissa", and
when the show was done, the members didn't cluster in front of the
drum riser and slap each other's backs, rather they slunk off the
stage, the same way you do after a day on the assembly line. But
rather than building Thunderbirds, last night the Allman Brothers
constructed a one time only event. That was not programmed to a
computer, that featured no dancing, other than that done in the
aisles. They started with their skills and a bag of tunes. And from
scratch delivered an evanescent experience that was the essence of
life itself.


There's a reason music drove the culture way back when. Because it
did set you free. It existed outside the system. It was made for you
and me, not for media consumption. Funny, but most of the business
infrastructure has fallen away. Certainly on the record side. They
may have received golden parachutes, but all the old execs are gone.
The ones still left were not pioneers, just inheritors of dad's car,
which they're driving straight towards the cliff.


But the musicians, they still remain. And they play. They've got no
choice. And those who remember venture to the shows. For not only a
hit of what once was, but for inspiration for what can be.


When done right, music is powerful. Talking heads in elected
positions can spew their hogwash, but they can't compete with the
power of the note from one guitar. This pure and easy sound
immediately penetrates the intended recipient, like an IV, going
directly to the bloodstream, bypassing cognitive functions. Hearing
it makes you want more, makes you want to play the tunes over and
over, go to the show, get to a place that's pure, absent the b.s.


Last night while fewer Americans than you would think were watching
has-beens trying to cling to fading fame on television, tying
themselves to two-dimensional singers looking for the standard rich
and famous contract, a band of seven players was doing the same thing
they've been doing for forty years, through thick and thin…playing
music, exploring inner and outer consciousness, blowing the roof off
the joint.