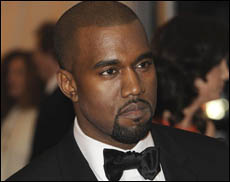 In other words, is she Kanye's Yoko Ono?

At first I was offended by the baseball stadium proposal. But once the video leaked online I understood the genius of it, it was all a fake promotional stunt, made to burnish the Kardashian brand.

But is it working for Kanye?

Kim is a phony airhead who denies having plastic surgery despite having lips as big as watermelon rinds.

That's what Kanye West does best. Bite back.

But anybody who doesn't know hate is the way of the Web is living in the last decade. Hate is a badge of honor, it illustrates you've made it. Ignore it or be brought down by it.

But now he's jumped the shark.

We were on his team. Edgy genius whose mother tragically dies before her time.

But then he kept telling us how great he was, tweeted inane insanities (most of which have been forgotten, showing the lifespan of a tweet), told us he wrote the lyrics for "Yeezus" in a stolen moment and then decided he was a fashion king.

Last time I checked fashion didn't have the soul of music. Everybody wants to be a musician, because a musician stands for something, life incarnate. Fashion is inherently adornment, something secondary. Then again, when music is so vapid, is it a huge stretch that fashion is now primary?

But my point is Kanye's got no expertise in fashion. He's like Michael Jordan playing baseball, maybe good, but not good enough. It's like Kim's mentor Paris Hilton deciding to become a deejay. No one's gonna stand for that. They won't let her in the club. She hasn't paid any dues, she looks like a dilettante.

And Kanye dating Kim Kardashian is an even bigger head-scratcher than Lindsey Vonn dating Tiger Woods after deploring him. But don't equate athletes with musicians. Athletes are about the body, musicians are about the mind.

So if you're sitting on the sidelines, you're wondering what got into Kanye. I don't know a guy alive who'd like to pork Kim Kardashian. It's like surimi, otherwise known as imitation crab, Paris Hilton did this first, she invented the paradigm, Paris blazed the way for the untalented being famous for nothing, Kim's just following in her footsteps, the only difference being Kim's got a better momager.

I give Kris Jenner credit. She made something out of nothing. She's laughing all the way to the bank. And like every television phenomenon, it's time-stamped, it'll be over at some point, but can't it be soon?

But the Kardashian Klan appeals to the downtrodden Americans who dream of being rich but can never be so. They can identify. None of the tribe is that good-looking, except for one of the teenagers, who keeps drinking and driving and getting into trouble and shouldn't she be in school?

Fame at a young age kills.

Because fame is empty.

Once upon a time Kanye was about his music.

Now he's just about his fame. And when you chase mass appeal, you eventually become a laughingstock. Kanye is John Davidson with an edge. Someone we keep seeing we wish would disappear.

He used to be a fighter. Now he's a winner complaining he's getting no respect.

Come on Kanye, you're laughing all the way to the bank. Now you want our sympathy?

You give your kid an inane moniker that everybody is laughing at, you put out an album no one wants to hear, you keep complaining you're not taken seriously, but you know why, KIM K!

Lamar Odom is a two-dimensional basketball player. You were supposed to be our hope, our dream, our leader, but instead you fell for the hype and can't fathom that we're all disappointed in you, which we are.

You don't have to get married. You're just gonna get divorced anyway. How do I know? No one who goes on the road has a first marriage that sticks, or to put it another way, show me a beautiful woman and I'll show you a man who's tired of screwing her.

At least the Kardashians know the press is a tool, a scummy subset in search of titillation for the brain dead. Photogs and reporters are voracious, sharks who eat 24/7 and are in constant search of food, you can't win feeding this beast unless you've got no talent and didn't deserve to be famous to begin with, like the Kardashians.

Which is unlike Kanye. Who made it on talent.

But we've got enough talented people. Blow yourself up, we don't care, the world moves on, there are tons more waiting to take your place.

We didn't need George Michael. What makes you believe we need YOU?