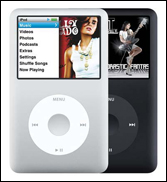 That's the problem. iPods are too hard to use. You can never find a USB cable. And what's with iTunes launching automatically, that SCARES PEOPLE! And thank god you can turn off automatic sync, to make it harder. And can you PLEASE tell me how to buy from the iTunes Store! What's this credit card information they keep asking for? Do you know what that is? I don't want to borrow any money… Or is it a credit like at the Zune Store? A point? That you can use to purchase music?

Thank god we've got people like Rio Caraeff over at Universal Music to help me. To make it easy. Now selling music on micro-SD cards.

Yes, I've got a phone with a micro-SD slot. I always take the back off my GSM phone. Yes, I decided on GSM because I travel the world. I believe CDMA carriers provide better service in the States, but… Yes, I'm aware that you can buy a BlackBerry with both chips. But usually when I go to Europe I take my U.S. phone and purchase a local chip and then go on Twitter and let everybody know my overseas number. Now I can bring a collection of micro-SD albums with me overseas! I've purchased a tiny little binder to collect all of them. And I've got a special rubber glove that allows me to pick them up. I love reading the liner notes on my mobile phone. It's so informative. Then I search via 3G technology and look up all the other credits of the players. It's so great living in the material world.

ARE YOU FUCKING NUTS?

That's what's wrong with newspapers. Writing articles so neutral as to be uninformative. What's that cliche? If tomorrow Dick Cheney said the earth was flat, even the "New York Times" would

write: "Roundness of the Earth in question."

I'd be happier if newspapers didn't even give any ink to this inane business concept. Or were at least more critical. The L.A. "Times" article linked below did have some negative comments, but what about the whopper they failed to contradict? That the iPod and iTunes are just too difficult to use and that the micro-SD card is the solution? That's like saying telephones are too hard to use, that's why everybody's switching to VOIP. No, it's worse… That's like saying Mac OS X is too hard to use and everybody's switching to LINUX!

Do you even know if you have a micro-SD slot in your phone? And, if you do, what are you going to do with the card inside when you buy an album? Talk about easy to lose… Let's go even
worse… Can you remove the back off your phone? On the BlackBerries I've had it's nigh near impossible. As for the tiny card, you've got to raise a door, insert it just so, close the door, put the back back on… FOR EACH AND EVERY ALBUM?

Oh, it's easy on an iPhone. Which doesn't have a slot, but has built-in GIGS of memory! But that syncs to the impossible iTunes.

As for the BlackBerry itself. I won't say it's counterintuitive, but now that there's push e-mail on the iPhone, I'd switch if AT&T's connections weren't so heinous.

slotMusic is an insane idea. Dreamed up by a company that has difficulty competing with Apple because it's got no software and is a heartbeat away from being taken over by Samsung. As for the labels running with this idea… Yup, they endorse nonstarters like this, but come up with an idea to actually give people what they want, online, and they say no.

Furthermore, any success in music retail is going to come from LOWER prices, not higher. And, to quote the business cliche, companies are going to make it up on volume.

And one more thing. For those so ignorant, for those at the labels getting their music for free… The only people who care about DRM/copyright protection ARE THOSE WHO ARE STEALING THEIR MUSIC! People who pay at the iTunes Store don't give a shit. Which is why the DRM-free tracks at Amazon and eventually MySpace Music are not taking over the market. You hear a lot of noise from the Net prognosticators, but those savvy enough to bitch online are also savvy enough to use BitTorrent.