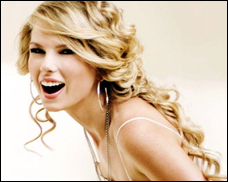 This is about money.

Not in the album, that's bupkes compared to the tour!

In other words, Taylor Swift is not selling a million plus albums this week to get rich on the sales, but to get rich on the penumbra. I.e. the tours, the endorsements, all the tchotchkes and change that come to the doorstep of America's most successful pop star. It's about the publicity, baby, and who cares if anybody streams her music on Spotify.

Spat, schmat. What we've learned in music is early adopters pay a price. That you're best off waiting for others to blaze the trail and then walking through the door and getting all the money. It's kind of like that joke about the baby bull and the papa bull and the cows down in the meadow…those who run get less.

Streaming has won, if you're talking about how people listen to recorded music. According to the RIAA, "These streaming services contributed 27% of total industry revenues in 1H 2014, compared with 20% for 1H 2013. The growth in revenues from streaming services offset the entire decline in revenues from permanent downloads for the first half of 2014." (They define streaming as including not only Spotify and its ilk, but SiriusXM and Pandora and YouTube and…"Streaming music services grew 28% in the first half of 2014 to $859 million, versus $673 million for 1H 2013." http://bit.ly/1ysNg8S) So Taylor Swift cannot turn back the hands of time, but she doesn't want to (at least not financially, as she herself has declared, her new album is retro).

So there's no story here. Other than one that can be trumped up by the media to further burnish Taylor's career/money-making machine. The facts don't matter, whether she had a spat with Spotify or not. The truth is Taylor Swift owns the news cycle, and he who reaches the most people wins today.

So on one hand we've got Ms. Swift. Whose scorched earth publicity campaign will end up putting the weekly sales crown on her head, the only 2014 debut to sell platinum in one week. If that's a statistic that tickles your fancy, you seem to have forgotten what 'N Sync achieved fifteen years ago. But that was a different era. One in which MTV still mattered, however briefly thereafter, most people did not have broadband and we knew and cared who was number one, we were living in a monoculture.

But today we live in a multifarious world where we come together on so few things. Taylor Swift is a rallying point, someone we can talk about, but it's got nothing to do with her music and everything to do with the publicity. Selling a million copies a week in a country of a million people is a blip on the radar screen, but owning the news cycle, even trumping the World Series, is priceless.

How long a career will Taylor Swift have? She can tour until she drops, as to whether people will care about her new music…

Does anybody care about Bob Seger's new music? The Luddite finally on iTunes and not on Spotify? Absolutely not. At some point the zeitgeist passes you by.

But Taylor Swift owns the zeitgeist this week.

But Spotify owns the zeitgeist in the future.