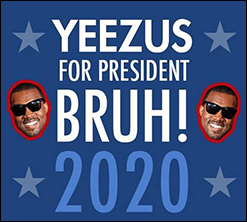 I asked a powerful music PR man why the press never went negative on Taylor Swift.


He said it was about access. As long as she was available, doing interviews, feeding the press stories, coverage would be positive. It's when you clam up that the media goes wild on you.


Which kind of explains why Kanye West is getting a pass.


Not completely. But here we have an egomaniac with little national traction, when it comes to music, being given a faux award and then rambling on for ten minutes nearly incoherently, sticking it to the man for giving him this award, any award at all. I'd say it's hypocritical, but what fascinates me is the press is not full of stories about him being a blowhard. Why?


Because everybody in America is trying to get rich and the young are impressionable and if we can just focus on the antics of the young 'uns we can get ahead.


Meanwhile, ratings for the show go down and one wonders what can be done next, live executions? George Carlin suggested that a while back, that ratings would be killer, but in our short attention span theatre, where everything is plowed under and history is irrelevant, no one seems to know, or get the joke.


Not that you can have a sense of humor these days. Because someone might be offended.


And the way you make hay on the VMAs is to offend. But that concept is so long in the tooth that we laugh when the oldsters get their knickers in a twist, because we know it's just about attention.


Attention…it's hard to get in the internet era.


You could make a record, but even that has a hard time triumphing. Happens every once in a while, with "Blurred Lines," "Royals" and "Uptown Funk," but what the industry thinks is important most of America does not so the way to get ahead is to be featured on this show, which resembles nothing so much as Halloween. That's right, you put on a costume and have a night out and then you forget about the whole enterprise until twelve months hence.


The reason the VMAs are irrelevant is because the station no longer airs videos. I'm not saying they should, I'm just saying that in the heyday of the channel what was hyped on the night was exposed thereafter ad infinitum on the channel, and we were all paying attention. It's a paradigm Beats 1 is trying to resurrect, by banging Halsey. Will it work?


That's not the issue. We know there are anomalies. But the truth is we all don't pay attention to anything other than the Super Bowl, which is why an appearance there is so meaningful and powerful. Prince resurrected his career, he can bloviate ignorantly about the internet but we all still care, because we saw him knock them dead at the game, whose contestants and score elude our memory.


But we haven't had "Little Red Corvette" in such a long time. A track that was indelible and so infectious that it didn't matter who made it, what the video was like, we needed more.


So, if we were living in the old days, Miley's manager would have brokered a deal wherein her new tunes would be featured on the outlet, ensuring they were hits. We'd all know them and we'd all talk about them. I give Ms. Cyrus props for dropping her LP right after the show, that's how you do it, strike when the iron is hot, when the eyes are upon you, in a flash, but no one cares.


That's the issue in America today.


It's not that people have a short attention span, it's just that they're overwhelmed with product to the point they don't care about much at all, percentage-wise, and those left out haven't stopped bitching. Hell, it's happening in television, read today's "New York Times."


But what the "Times" has that those appearing on the VMAs do not is a new paper, they're in the public eye every day. Whereas you get your shot on the VMAs and if you don't catch fire, you're done.


So what have we learned?


If live shows were so important, a gathering of the tribes, ratings would soar, but they don't. We've seen the trick, the antics, the train-wrecks, and it's no longer new.


But if you're not featured on one of these shows it's even harder to get traction.


And everybody who puts money first plays by the rules. Developing acts that fit the paradigm are hyped this way to the point only the ignorant care.


What I've been telling you all along, a whittling of the culture, a reduction of the offerings. Even fewer tracks are going to be hits. And you may not like what is selected, but popularity is everything in today's culture.


And popularity can be manipulated, but victory truly occurs when the machine melds with quality such that we all care.


We can argue all day long whether "Blurred Lines" rips off Marvin Gaye, but we all agree it's an infectious track.


As was Gnarls Barkley's "Crazy." If only Kanye kut one that good.


But he's so busy pursuing his power dream of ubiquity that he's lost focus, he expects us to care, but most don't.


But no one in the game will admit that.


What the internet has taught us is the consumer is king. It's happened over and over again. The consumer gave us file-trading then streaming. Don't blame Spotify, that's long after the fact.


And most consumers don't want what the music industry is giving them. And rather than adjust, the players are just doubling-down. Becoming even more crass.


So, the VMAs are irrelevant unless you were on them. Most people didn't watch them and didn't care. If you say you hate the tracks, join the club. If you wonder what is going on, the media and powers-that-be believe youth drive the culture.


But we've learned the oldsters have the money.


And we all have smartphones.


And we all think we're hip.


And the way you win is by appealing to everybody.


Don't expect people to pay attention if you're niche.


But if you've got a great voice, write melodic material with good changes, employ hooky choruses and a bridge, the world is your oyster.


"Soul-Searching in TV Land Over the Challenges of a New Golden Age": http://nyti.ms/1LGE7gi