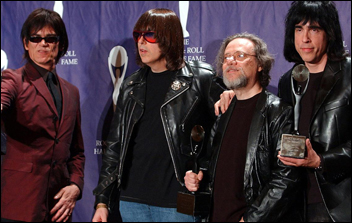 Who'da thunk they'd all be dead but their music would live on?


Certainly not anybody who came across their debut in the bins back in '76. With its black and white cover and music so contrary to what was happening as to be almost incomprehensible, or a joke.


But despite having a great sense of humor, the Ramones were no joke. They were fans. They were every suburbanite's dream. They hewed to their ethos until the very end, until the world caught up with them.


That's right, the Ramones never had a hit. But now their music is played in stadiums, babies wear their t-shirts. Proving the greatest artists have a plan and stick to it.


Not only were the Ramones not art rock, overblown like Yes and Genesis, they never went disco, they never cut corners, they were just…originals.


Credit Hilly Kristal, for giving them a place to play.


Credit Seymour Stein for giving them a deal.


And Tommy was an original Ramone. One can argue that by time he was gone, it was all over. Yup, Tommy coproduced "Road To Ruin" with Ed Stasium after relinquishing the drum chair to Marky, and after that the band started looking for an elusive hit as opposed to being just them.


And they were themselves from the very beginning, one can argue they emerged fully-formed, their debut opened with the legendary "Blitzkrieg Bop" and segued into "Beat on the Brat," that's what you do with a baseball bat, right?


"Leave Home" had the legendary "Carbona Not Glue," featuring the pastime of the bored and misdirected.


And then came the second masterpiece, "Rocket To Russia." How could it be that a band from Queens could do the Beach Boys better than the originals? Joey had that nasal sound and there were more hooks in "Rockaway Beach" than not only those contained in the works of the SoCal surfers, but many of those on the hit parade. Come on, an ode to a local haunt that required no pilgrimage, but was part of the DNA of the locals?


And it was on "Rocket To Russia" that we learned that Sheena was a punk rocker.


And on "Road To Ruin" was the band's apotheosis, "I Wanna Be Sedated."


They say that everybody who bought the first Velvet Underground album started a band. I won't debate that, but I will say that many more bought "Ramones" and picked up instruments and formed groups. Because if the Ramones could, so could they. Especially in England, where punk flourished first, after being started in NYC by the Ramones and getting no traction in the USA. So most people in the hinterlands were first exposed to punk via the Sex Pistols, but Johnny Rotten, et al, were inspired by the Ramones.


The Ramones were a constant reinforcement that we shouldn't take ourselves too seriously, that two minutes was enough for a song, and that first and foremost rock should be fun, you remember fun, don't you?


And now they're all gone.


I saw 'em. At the Whisky. Because despite their rep, the halls were never big.


I met Tommy only once, and he was surprisingly normal. He had a hip affect, most musicians do, but he was approachable, no different from the guy who sat in the back of the room in high school math.


So let's pause for a toast to a band of originals. Who didn't die in a plane crash, but met their demise just the same. Was there something in those vans, something that caused all of their lives to be cut short?


But they're getting the last laugh, because with every passing year their legend grows, they only get bigger.