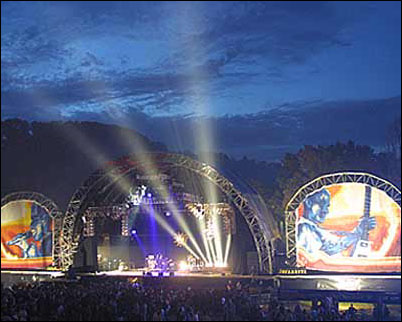 SWITZERLAND: This year's Open Air St Gallen attracted 29,270 paying guests, 7,270 more than would have been required to break even. The total turnover CHF 4.8m exceeded the budget by CHF 500,000. The organizers also managed to save CHF 300,000 on costs. "All in all, we will have made a profit of around CHF 500,000", disclosed Marketing Manager Michaela Silvestri at yesterday's press conference. However, she did point out that the final figures had yet to be published. There was also still a loan of CHF 250,000 due the St. Gallen city council. Talks would be held on the possibility of paying this back early, which would also lead to a reduction in profits. The budget for the 2002 festival will not be increased and will once again be about CHF 4m. 23,000 spectators will be required in order to meet overheads.

The organizers believe that a combination of good weather, the fact that they were celebrating the 25th jubilee and a relaxing of competition in the area contributed to this year’s success.

As previously announced OpenAir St. Gallen looks set to be changed into a limited liability company (AG) on December 31, 2001. Michaela Silvestri indicated that there are a number of reasons for doing this. An important factor is to limit the organizers' risk. It would also enable other people to invest in the company. Silvestri also pointed out that by setting up an AG, the firm's business activities could be extended, and it would also enable them to monitor their structures more effectively. "The talks and points being clarified with regard to setting up the limited liability company are taking longer than originally planned, from a structural perspective in particular. We are giving all the factors careful consideration and examining participation’s and areas of responsibility closely."