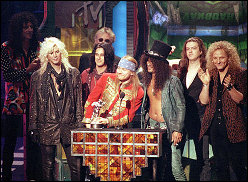 CLEVELAND (VIP NEWS) — The original members of Guns N' Roses will come back together in April, keyboardist Dizzy Reed has revealed.

The band will appear together to be inducted into the Rock and Roll Hall Of Fame in Cleveland.

"I know that all the original band is going to be there," Reed told Billboard. "I'm just going to go in with a good attitude and a clear head and a grateful heart."

It's not yet clear whether the band will perform at the event.

"I don't know exactly what's going to go down," Reed added. "It's one of those things I'm sure will all come together and be really cool."

Guns N' Roses have been through multiple line-up changes in the last few years.

Dizzy Reed is the second longest-standing member of the band after lead singer Axl Rose.

The current line-up of Guns 'N Roses last performed in the UK in 2010.

They were bottled off stage at a concert in Dublin after they arrived on stage nearly an hour late.

The gig was preceded by a controversial headline slot at the Reading festival, where their set was cut short after they played past their curfew.

The band released their debut album Appetite For Destruction in 1987, which topped the UK album chart.

All of their albums have charted in the top five since then, including their most recent release Chinese Democracy.

The band's current line-up is due to return to Europe later this year including dates at Dublin's 02 on May 17.

When asked about a possible new album, Reed said: "There are some clamouring and rumours that we might be getting some material together after we do this so we'll see what happens."