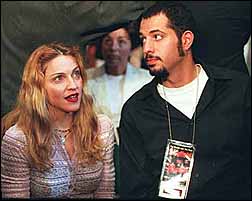 (CelebrityAccess MediaWire) — Maverick's Guy Oseary has joined forces with Untitled Entertainment and its principals Jason Weinberg and Stephanie Simon. "My entry into the management business is long overdue," said Oseary "I was waiting for the right partners and the right company. Jason Weinberg and I have known each other since the beginning of my career. He and Stephanie have built a first-rate management company and I'm thrilled to be working with them."

"Guy is a great friend and an amazing businessman," said Weinberg. "We look forward to working together in the full-service representation of actors, writers, directors and producers, as well as expanding our efforts in such areas as branding and film and television production."

Oseary will continue to partner with Madonna in Maverick Records and Maverick Films. Maverick Records artists include Alanis Morissette, Michelle Branch, Deftones and Story of The Year. As co-owner of Maverick Films, Oseary produced "Agent Cody Banks" and its sequel for MGM and is currently producing "My Sassy Girl" for DreamWorks with Gurinder Chadha ("Bend It Like Beckham") attached to direct. He is also working with Academy Award-winner Chris McQuarrie on "Stanford Prison Experiment," which details the real-life experience of the students who participated in Professor Phil Zimbardo's groundbreaking 1971 experiment.

Oseary is also producing a mini-series on the 80's for NBC, is the executive producer of Last Call with Carson Daly, also on NBC, and has written a new book entitled "On the Record," which features exclusive, in-depth interviews on life and music with over 150 of the most successful and talented artists and industry professionals. It is scheduled to be released by Penguin in the fall of 2004.

Untitled Entertainment will continue to maintain offices on both coasts.