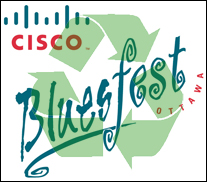 OTTAWA, Ont. (CelebrityAccess MediaWire) -– Cisco Ottawa Bluesfest organizers have announced plans for an opening gala at the all-new, state-of-the-art Ottawa Convention Centre. The event will take place Tuesday, April 26 and feature an evening of food and drink, a cast of celebrities, including Ace of Cakes Duff Goldman, and the line-up announcement for the 2011 Cisco Ottawa Bluesfest.

Musical entertainment will be provided by Canada’s own Maple Blues Revue featuring Chuck Jackson, Dawn Tyler Watson & John Mays as well as some of Ottawa's local favorites. The event will be dedicated to raising funds for the Boys and Girls Club of Ottawa, the Community Foundation of Ottawa, the Sens Foundation, and Raise-a-Reader charities.

When it opens this April, the Ottawa Convention Centre will be the premier Canadian convention centre and events venue. The location overlooks the UNESCO World Heritage-designated Rideau Canal and is surrounded by Ottawa’s national landmarks, cultural treasures, natural beauty and many amenities. A sweeping, windowed façade will afford panoramic views of Parliament Hill, Confederation Square, and the National Arts Centre.

This once-in-a-lifetime event will also offer patrons an opportunity to say, "I was among the first-ever to dine at the Ottawa Convention Centre," not to mention ‘being there’ when Bluesfest executive director Mark Monahan unveils the much anticipated line-up for the 2011 edition of the Cisco Ottawa Bluesfest.

"We typically announce our line-up during the last week of April, so this is a great opportunity to do it in a big way," says Monahan. "It’s also a great way to make the most of the popularity of our festival by getting together with some great non-profit organizations to raise funds for some very worthwhile charities."

Registration forms for tables of 10 ($2,750) and individual tickets ($300) are available on-line at ottawabluesfest.ca. Registration forms can also be printed from the website and sent by fax or by mail to the Ottawa Bluesfest office. – CelebrityAccess Staff Writers