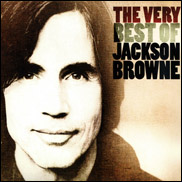 So Jackson Browne goes to see Lyle Lovett at the Arlington Theatre in Santa Barbara and in the middle of the show Lyle calls him out, insists he come up on stage and perform a number.

Jackson figures he's going to sing backup. But Lyle hands him a guitar and makes him sing one of his own damn songs.

So at first David Crosby is reluctant to leave the audience. Even after the assembled multitude is on its feet cheering him on. But eventually Crosby accedes, goes on stage, takes off his pass, removes his jacket and his iPhone from his pocket and straps a guitar around his neck and starts tuning. He too is being forced to play one of his own.

And if you had reached puberty in 1969, the notes David was picking were unmistakable.

He was playing "Guinnevere". The third song on the first side of the Crosby, Stills & Nash debut.

But Crosby's complaining. After getting the tuning right, he just can't find the notes. The pearl dots on Jackson's custom made guitar are not in the right place. So Jackson extracts another one of his seventeen acoustics from the rack and Crosby changes songs.

I saw Crosby by the stage door. I figured he might come up on stage and sing harmonies. After all, he did so on Jackson's debut.

And this man who resembles no one as much as Santa Claus can't remember the words. And having stopped in contemplation of where to go next, a fan shouts out the following lines and David begins again.

"And I once loved a girl, she was younger than me
Her parents kept her locked up in their lives
And she was crying at night, she was wishing she could be free"

That's what it's like being a teenager. You feel oppressed. Your only escape, your only hope is music.


And then Crosby stumbles again. And calls out to his wife…

And after she tips him off Crosby finishes off and it was like being in a living museum. Crosby's not the one who's supposed to be able to pick the notes, that's Stephen, or Neil. And if you're this old your voice is supposed to be cracked and shattered, when you sing we're supposed to remember what once was, we're not supposed to be jetted back to the original era.

As great as Jackson was, and he was stupendous, Crosby singing "Carry Me" was transcendent.

But then the roadie came out with another instrument, tuned to David's specs, and he sang "Guinnevere" after all.

But that's the power of music.

This is why Jackson Browne is famous, why he can still fill venues forty years on. Because in his lyrics he encapsulates life.

Everything I knew about sex and relationships I learned from movies and songs. They were my blueprint. And I wandered through life looking for a living experience of art. It kept me going, it gave me hope.

What was astounding about the show last night was Jackson played all the songs he never does. Like this, the third number on "Late For The Sky". And "Our Lady Of The Well", which "Take It Easy" segues into on his second album, Numbers that are in our DNA but we only hear on record. That we've given up on hearing live.

And it's one thing to perform a complete album. Which is usually a dash for cash.

But when a performer digs deep into his catalog and whips out one of your favorites, you swoon.

He didn't only have those seventeen guitars. Jackson also had an electric piano.

And in the middle of the show he sat down and banged out those notes that have been played on radio more than any other of his compositions.

And you're supposed to be burned out on the hits. You've heard them so much.

But without a band, playing the song solo, it became even more powerful. The whole audience became energized, started bopping.

"Just say if it's too late for me"

This was not a young audience. Not as much white hair as at a Simon & Garfunkel concert, but those in attendance were already who they were gonna be. That's what happens when you get older, you start to feel you're living in molasses, that it's hard to move, never mind change. But experiencing "Doctor My Eyes" stripped down, hearing the drums in your head, you still believed there were possibilities.

I first saw Jackson Browne opening for Laura Nyro at the Fillmore East in December 1970. Just him and his guitar. As the numbers unfurled, the walla-walla of the audience subsided, we realized we were in the presence of greatness.


But it took another year for Jackson's debut to be released.

To no fanfare. To no radio play.

But I'd been waiting for it.


And I took it back to college and played it on those short gray days. And it was "Something Fine" that resonated most. Because it had a wistful quietness that equated with my college experience. I wasn't where I wanted to be, I was en route to somewhere else, but I had to hang on in the meantime.


Meanwhile, Jackson didn't only play this from his debut. And the aforementioned "Doctor My Eyes". And "Rock Me On The Water".


But "Jamaica Say You Will".


Jackson not only played "Before The Deluge", but "The Pretender". Even "In The Shape Of A Heart". Even "Rosie".


But the one song we never expected him to play, he did.


"Running On Empty" is a rocker.


And this was an acoustic evening.


But Jackson added an effect to his black-topped six string and suddenly we were on that bus, road rushing under our wheels.


"Looking out at the road rushing under my wheels
Looking back at the years gone by like so many summer fields
In sixty-five I was seventeen and running up 101
I don't know where I'm running now, I'm just running on"


In '65 I was twelve. I'd never been west of Pennsylvania.


You go through Oxnard, the freeway hugs the ocean and suddenly you're in Santa Barbara. A place ninety physical miles from L.A. but a world away in headspace.


L.A. is all hustle and bustle.


Santa Barbara is more about lifestyle. And is somehow more intellectual.


This was not an industry crowd. These were fans. Who didn't work in the entertainment industry during the day, but who had been infected by music.


That's what being a rock star is like. Running on empty. Going from gig to gig, radio station to radio station. And you don't really want to complain. Because the adrenaline is pumping and you feel so alive.

We believed in our rock stars. They were leading the way.

They were heading straight forward, but no matter how fast they were going there just wasn't enough time.

Funny how when you get older these songs make sense.

And time is running out.

Talk to the people in this business. They were working so hard it broke up their first marriage.


It's a delicate balance.

You become who you are when you're not noticing.

This is a postcard from the road. Not a rapper saying he's better than you and you'll never be privileged to understand, rather a note from one of us to say he's experiencing life in the fast lane and it's scary and exhilarating all at the same time.


And if you're lucky, you feel the same way too.


If not, come to the show, and for a few hours you too will be on the freeway of life, screaming at ninety miles an hour headed straight into the sun.

Jason told me his father needed an operation.

You can tell when people are scared. There's something in their voice. His dad was in his eighties. The doctor was not optimistic. And when the doctors stop saying its routine, not to worry, you get frightened.

I didn't expect it.

He had cancer. Terminal. But when he finally expired I was shocked.

I quoted these lyrics at my father's funeral.

That was back when no one I knew had died.

Now I know too many six feet under.

What's the cliche? No one here gets out alive?

Or, like that Zevon song Jackson sang last night, "Life'll Kill Ya"?

When this song was released I'd just graduated from college, the whole world was in front of me. Now so much of it is behind.

Before singing "Barricades Of Heaven", about meeting some girl back in the sixties, Jackson said the audience knew of which he was gonna sing, or they just weren't alive back then. The sixties and seventies were a special time. They're the core of the baby boomers' existence. Our memories make us smile. But not only are the memories fading, but the people too. That's what's

next for us, death.

Jason's father pulled through the operation. He was on the road to recovery.

But then he wasn't.

And early last week he expired. Pfftt. Just like that. Over.

We're afraid. And the older we are, the worse it gets. We don't want to move a few steps back on the game board, it was so hard to get here. We don't change jobs, we don't change relationships, we start dying instead of living. We just can't handle another failure, another loss.

I know it's hard.

So put on a record. Go to the show. Return that smile to your face.

And fire up your machine, hit the highway and head straight towards the sun.

You don't want to die with the most toys, you want to die empty. Spent. Having lived life to the fullest. Having no regrets.

LATE FOR THE SKY

You've got to understand, California was a dream.

And so was rock and roll.

If Paul McCartney came to a baby boomer's house today he'd be both giddy and speechless. That was the impact the Beatles had.


And the Beatles ushered in a slew of creativity. The highest calling was being a musician. You didn't want to go to Wall Street, tech was for nerds and everybody was paying attention to the hit parade. First on Top Forty radio, and then a more experimental version on FM.


If you practiced really hard and got really good and had something to say there was an audience ready and willing to hear it. Addicted to the radio. Not distracted by hand-held communicators or computers.


These were our heroes.

And sure, some of them were flashes in the pan.

But not all of them.

But not our memories.

Forty years on, Jackson Browne has a catalog. He can perform for two hours and we know every song, and he can go on tour year after year and play different material. That's the life of an artist. Not the momentary success, but the ongoing commitment. To getting better.


Not that we always know who's going to get better. After the Eagles told Jackson they'd no longer be doing outside material he told them that was a mistake. He had to laugh looking back.

Words come easier to me than love. Maybe because my parents never touched me. But I am old enough to know life doesn't mean much if you don't have someone to share it with. Art helps, but it is not enough.


But art gets you through.