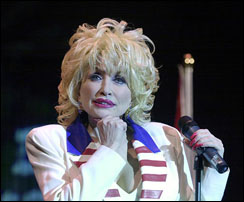 Recognition of outstanding industry contributions is part of the mission of the Country Music Association, including those accomplishments outside of the domestic borders. The CMA Board of Directors bestowed international honors on four individuals including country music icon Dolly Parton.

"Part of the CMA mission statement is to bring the poetry and emotion of country music to the world," said CMA Executive Director Ed Benson. "No one has lived up to that goal more than Dolly."

"Dolly is a true international icon and a recognized ambassador for country music," Hagen said.

The Jo Walker-Meador International Award, which recognizes outstanding achievement by an individual or company in advocating and supporting country music's marketing development in territories outside North America, was presented to Jeff Green, executive director of the Americana Music Association. Green, a 27-year music industry veteran, served as a CMA senior director for nine years with responsibility for international development, introducing the successful CDX service to international members. Before joining the AMA, he was executive editor at Radio & Records. He also volunteers his time as part of the Nashville-based CMA Global Markets Advisory Group.

"To join so many distinguished and deserving colleagues in sharing this award borne from the international spirit of Jo Walker-Meador is an honor beyond words," Greene said. "I want to thank Ed Benson, Tammy Genovese, the entire staff of CMA, Jeff Walker, Bobbi Boyce and all of my internationally devoted friends and colleagues everywhere. I will continue to work as hard as I can to help artists, songwriters and industry associates succeed around the world. International is a global family and I am glad to be a part of it. I am touched beyond words. I will cherish this forever."

Allied Artists, Australia was presented the International Talent Buyer/Promoter of the Year Award. The winner must have promoted at least two concerts of Nashville-signed artists in the past 12 months. Allied Artists continues to be the major Australian-based music promoter that regularly tours North American country music artists in the Australian market. In the last year, the company has toured Terri Clark, David Lee Murphy, LeAnn Rimes and Keith Urban, as well as assisting Sony Music with the promotional tour for Gretchen Wilson. The company continues to work with local record companies to grow both fan and sales bases for acts in the Australian market.

Nikos Garavelas from Greece was presented the International Country Broadcasters Award, which recognizes outstanding achievement by radio broadcasters outside North America who have made important contributions to the development of country music in their country. Garavelas, whose career in radio started in 1987 during the first year of privately-owned radio stations in Greece, was the first person to play country music on Greek radio. Since 1993, his show has topped the ratings in Greece. He created the ONOKIO Country Music Café and The Country Music Club of Greece, and is a published author with Country Music The Stories.

"Country music is my life," Garavelas said. "I've spent the last 25 years so the Greek people know about Country feelings and the stories behind the songs. Music is known to bring tears of joy or tears of pain. It so happens I was feeling both today."

"I have seen first hand how Jeff Green has worked tirelessly for the music that he loves," said Benson. "Allied Artists, Australia, led by Rob Potts, has opened many doors in Australia for country music. And Nikos Garavelas has been a true champion for country music in Greece. These gentlemen are truly deserving of these honors."

"For the third time, this was a very successful event," said Jeff Walker, head of the CMA Global Markets Task Force. "The direction of focusing on the music and the bringing together of multiple territories was the whole purpose. Within these territories, I feel this event created an enthusiasm for global marketing of country music. Bruce Allen gave everybody a wake-up call on what needs to be done to take country music viably to the next level, internationally." –Jane Cohen and Bob Grossweiner