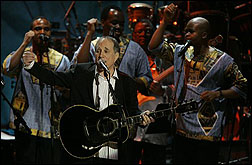 WASHINGTON (CelebrityAccess MediaWire) — Singer Paul Simon was joined by a variety of artists, including Art Garfunkel, Allison Krauss and Ladysmith Black Mambazo for a concert on May 24th to honor the singer for his contributions to popular music.

According to a report by Reuters, the concert, which was staged by the U.S. Library of Congress, was held for Paul Simon who was awarded with the first Gershwin Prize for Popular Song.

Joining Simon were his ex musical partner Art Garfunkel. Simon and Garfunkel were a very successful folk duo during the sixties but the pair split up in 1970, reforming briefly in the early 1980s and then again during 2003-2004. Simon was also joined by South African Choir Ladysmith Black Mambazo, who were among the musicians featured on Simon's landmark 1986 album Graceland. Simon has not performed public ally with the choir since 1999.