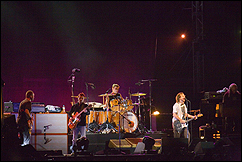 (CelebrityAccess MediaWire) — Pearl Jam's first-ever tour of Latin America finished up on December 10. Its four-country tour of arenas and stadiums drew more than 290, 937 fans to its 12 shows in Brazil, Chile, Argentina and Mexico. According to promoter OCESA Presents Inc. and CIE, the tour was a groundbreaking, first-of-its kind success.

Tour highlights included: fastest stadium sellouts in the history of Sao Paulo Brazil, with two sold out shows at Pacaembu Stadium (40,006 capacity); a pair of the strongest selling shows ever in the history of Santiago Chile (San Carlos Apoquindo – 25,416 capacity); and combined with the band's last shows in Mexico City in 2003, an unprecedented five consecutive sold out shows at Palacio de los Deportes (19, 978 capacity).

OCESA Presents notes that adding to the great satisfaction of the success of the shows was that with the all general admission shows, there was not one hospital transport or serious injury. Under the direction Pete Beattle and the Pearl Jam security ensemble (NPB Companies), the combined Pearl Jam and OCESA security staffs implemented a security plan that utilized an innovative barricade design in an effort to ensure audience safety.

"In my opinion, this is the most successful tour of Latin America in the history of rock & roll," said Bruce Moran CEO, OCESA Presents Inc. "Few Artists of this stature devote an entire tour to Latin America, and that alone makes these dates historic. It was an honor for us to guide Pearl Jam through Mexico and South America."

"It was a really wonderful journey of discovery for us," said Nicole Vandenberg, Pearl Jam's longtime spokesperson. "The countries are beautiful and the crowds are amazing – we thank the fans of South America and Mexico for making this tour so extraordinary." — Jane Cohen and Bob Grossweiner