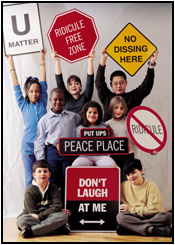 Peter Yarrow, of the folk-singing trio Peter Paul and Mary, is campaigning against bullying and will play two free concerts in the Chicago area September 24-25. The concerts are sponsored by National-Louis University and the Association of Illinois Middle- Level Schools.

Yarrow will appear Sept. 24 at the Weinstein Auditorium for the Performing Arts at National-Louis' Evanston campus and Sept. 25 at the Hubble Middle School in Wheaton.

Yarrow's appearances highlight his work with Project Respect's Don't Laugh at Me Project, a national educational campaign aimed at addressing disrespect, ridicule and bullying among youth. Cynthia Mee, director of the Middle Level Education Program at National-Louis University, calls the concerts "particularly timely" in light of last week's terrorist attacks in New York and Washington. "The music, wisdom and words from Peter Yarrow go directly to what each of us can do to promote enlightenment, courage, and safety within our local communities," she said.