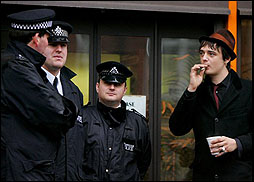 WILTSHIRE, UK (CelebrityAccess MediaWire) — A Wiltshire festival has been canceled after local police banned Pete Doherty's band Babyshambles from performing at the bash.

According to NME, Wiltshire police requested the ban over concerns that Doherty and the boys were likely to "invite violence" and it was granted by North Wiltshire Magistrates.

Subsequently, festival organizer John Green scrapped the festival "due to the ramifications presented to us by the actions of the police," NME reported.

Wiltshire police superintendent Paul Williams told the BBC that "The issue is not the act itself, it is the profile of fans that follow the act."

All is not lost for Wiltshire Babyshambles fans however and the band is reportedly working behind the scenes.

"The whole thing is a farce, it's almost comical," he told NME.COM. "The organiser of the festival is now on the verge of bankruptcy. "Why? Because we intentionally speed up and slow down the tempo of our songs. We're now in the process of trying to make it happen in a different venue. Watch this space." – CelebrityAccess Staff Writers