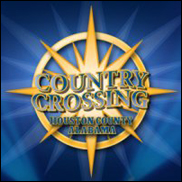 DOTHAN, AL (CelebrityAccess MediaWire) — Continuing uncertainty about the Governor's Task Force on Illegal Gambling has yet again led to another postponement for the re-opening of the multi-purpose Country Crossing Entertainment Complex.

The complex has been shuttered since January, when it was preemptively closed to avoid a raid by the Governor's Task Force on Illegal Gambling. Since then, the bill authorizing electronic bingo gaming became a controversial issue in the state's general assembly and is a key attraction at Country Crossing.

Country Crossing had planned to re-open on March 25th after learning that the state's Attorney General was taking over the Task Force on Illegal Gambling that had previously been run by the Governor. However, when Country Crossing attorneys learned that the state Supreme Court had refused to dismiss an appeal by the Governor over the Attorney General's assumption of control of the task force, they decided against reopening.

"I am leaning on our attorneys who are trying to get their arms around the situation. We have a very good team and I am waiting on them as we speak," Country Crossing Developer Ron Gilley told the Dothan Eagle. "All we can say at this point is we hope we will open the doors soon. We feel very, very confident we will." – CelebrityAccess Staff Writers