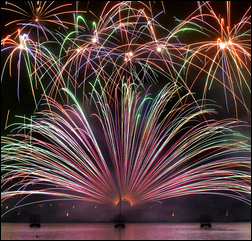 DA NANG, Vietnam (CelebrityAccess MediaWire) — Pyrotecnico's "Rock Loves.." pyrotechnics display has been selected as the only US-Pyro-Musical show to perform at this year's Da Nang International Fireworks Competition. The competition, which takes place on March 28 & 29, is part of the city of Da Nang's 35th annual liberty celebration and is expected to draw upwards of 60,000 people.

In addition to the fireworks shows, spectators will have a chance to enjoy music and dance performances as well as lantern floats.

Pyrotecnico is a New Castle, PA-based family-owned company that has been in business for 120 years and stages more than 2000 shows a year in the U.S. and abroad. In addition to their Pennsylvania location, they maintain offices in Dallas, Philly, Vineland NJ, Atlanta, Las Vegas, Tampa and Montgomery, Ala. – CelebrityAccess Staff Writers