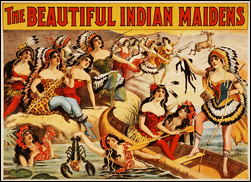 OTTAWA, ONTARIO (Hypebot) – With electronic music a large part of youth culture, we're seeing numerous issues surface that have come up in the past. The trend of wearing Plains Indian warbonnets, aka "Native American headdresses," is being attacked and has now been banned at the Bass Coast festival. Sniffer dogs are also under attack but their presence at festivals is unlikely to change at this point given the almost total lack of political organization of those in electronic music except for some providing services at a local level.

Of course, calling a Plains Indian warbonnet a Native American headdress is similar to calling a Scottish kilt a form of European menswear. Each has different significance in their related culture but the tendency of many in the U.S. to speak broadly of Native American sayings, customs, etc. is typically a sign of ignorance though often commingled with respect.

There are lots of terminological issues but the bottom line is that wearing sacred items from other culture because you think they look cool is disrespectful, self-centered and somewhat childish. If you disagree, I suggest starting here:

An Open Letter to Non-Natives in Headdresses

But Why Can’t I Wear a Hipster Headdress?

Calling For A Ban On Sniffer Dogs

Dan McNamee, a member of Art vs Science, recently wrote on Facebook that he was encouraging Australian politicians to test a temporary ban on sniffer dogs at last weekend's Splendour In The Grass festival.

The basic idea is that sniffer dogs stress people out causing some to take all their drugs at once and, in some cases, die. History and a recent study back up this conclusion.

I assume it didn't happen or we'd hear more from In The Mix who gathered together coverage and also created a guide to "Drugs, Sniffer Dogs, Your Rights and Safety" (in Australia).

Wherever they are, most concertgoers understand this dynamic, one in which we've been trapped arguably since the late 60s though one could put it in a larger timeframe as well.

Banning sniffer dogs could be considered a form of harm reduction, which works, as opposed to drug eradication, which is a dismal failure.

Honestly, some kids might stop wearing headdresses and the like but getting politicians and cops to change their ways? That's a tough one without an organized political base and the will to fight for what you think is right.