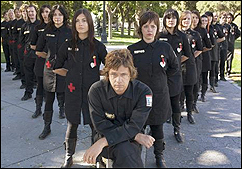 NEW YORK (CelebrityAccess MediaWire) — The Polyphonic Spree have confirmed a month-long summer North American tour supporting their new album, "The Fragile Army." TVT Records will release the album on June 19, with the tour kicking off June 23 in the Spree's hometown of Dallas and continuing through 25 dates in major markets across the U.S. and Canada, concluding August 3 at Lollapalooza in Chicago.

The Polyphonic Spree have adopted a new look and sound for "The Fragile Army," with more driven, urgent songwriting and black military-style uniforms replacing their trademark robes. Reviewing a live set from this year's SXSW music festival, Pitchfork described the new Spree: "Less sedentary sun-worship and more a momentum-fueled call to arms. Less grace and shimmer, a little more chaos and danger. And oh yes — still positively exhilarating to behold."

The same day "The Fragile Army" hits stores, TVT will also release a special edition of the album, packaged with a 52-minute DVD documentary on the making of the album, compiled and edited by Spree co-leader Julie Doyle; a video for the album's title track, shot by Dallas photographer Hal Samples; and a "The Fragile Army" patch, similar to those on the sleeves of the band's new black uniforms.

The Polyphonic Spree's complete summer tour dates are as follows: