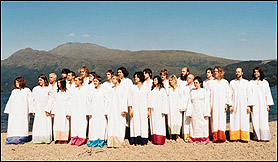 (VIP NEWS) — Pop group The Polyphonic Spree, one of the most hotly tipped bands of 2003, have been dropped by their record label, it has emerged.

The group, up to 23-strong in live shows, have graced several festivals this summer.

Their label, 679 Recordings, dropped them due to lack of record sales.

But the band are preparing a new deal and a second album is to be released next February, a band spokesman told BBC News Online.

It is understood the band had been dropped before their sell-out show at London's Brixton Academy on 4 July, as well as a TV appearance on CD:UK on ITV1.

But the band's spokesman disagreed with a comment from 679 to the Sun newspaper that the band had not sold enough copies of their debut album, The Beginning Stages of…

"Their album has already sold 80 to 85,000 copies. Also it is not their job to sell records, it is their job to record and tour them," he said.

The Polyphonic Spree, from Texas and fronted by Tim DeLaughter, have been regular visitors to the UK and championed by music press such as the NME.

They also were one of the four bands featured on the NME's national tour earlier this year.

The band had already recorded and "virtually completed mixing" their new record and should announce a new deal in a month's time, the spokesman said.