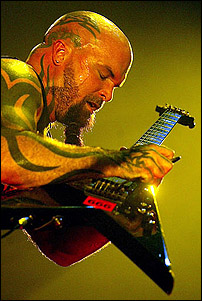 (CelebrityAccess News Service) – Slayer will be headlining the Jagermeister Fall Music Tour, produced and promoted by Clear Channel Entertainment, which continues its three-year relationship with the tour. Kicking off October 8 in Minneapolis, MN, it winds down in Los Angeles on November 29. Hatebreed is the main support act with Sweden's Arch Enemy rounding out the bill.

"Slayer has never done a sponsored tour, mainly because we never thought anyone was worthy enough to have their name along side ours," says Slayer's Kerry King. "But now, with Jagermeister willing to jump on board, we will conquer the US like no one has seen before!"

"Jagermeister is thrilled to be working with Slayer," concurs Rick Zeiler, director of Marketing and Brand Development for Sidney Frank Importing Co., Inc., the importers of Jagermeister. "We've been huge fans of the band for many years and to have them on our tour is a dream come true."

Rich Levy, vice president of Booking/ National Sponsorships for CCE, adds, "We are proud to be involved in the continuing growth of the Jagermeister Music Tour. This year's tour with Slayer is taking things to another level. It is always great to work with a brand that has an ongoing commitment to music as a marketing strategy and Jagermeister continues to be a leader in the field."

Each performance will feature a local opening act sponsored by the Jagermeister Band Program, the highly touted program designed to seek out and promote up-and-coming talent. Fans will also be treated to world premiere freestyle motocross footage from members of Metal Mulisha. And of course, the world-famous Jagerettes will be on hand along with the Jagermeister Buses, making sure everyone is having as much fun as humanly possible.