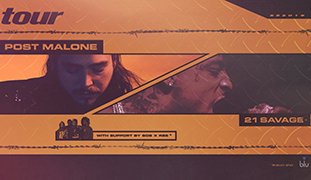 Produced by Live Nation and sponsored by blu, the outing will kick off April 26 in Portland, OR and make stops in 28 cities across North America including Seattle, Nashville, Toronto, Atlanta, Austin, and more. The tour will wrap in San Francisco, CA on June 24.

Ahead of the tour, Post Malone will be launching his latest single “Psycho” [feat. Ty Dolla $ign] on Friday February 23, 2018 via Republic Records. The new track arrives on the heels of his hit “rockstar,” featuring tour mate 21 Savage. The tracks are the latest in a trickle of material from Post Malone’s forthcoming album “Beerbongs & Bentleys” which is due this year after being pushed back out of 2017 due to production trouble.

“Hey guys, i know a lot of you guys were expecting a project today, it won’t be dropping for a little while,” Malone tweeted about the delay in early December. “I’m sorry to let you down, but i need to make sure this album is perfect for you. I’m gonna keep working my ass off and make the best fucking album ever. i love ya.”