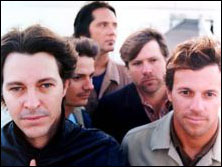 SYDNEY, Australia (CelebrityAccess MediaWire) — Powderfinger is still a big hit with the fans down under and when tickets went on sale for their upcoming tour, they went fast with some dates selling out in mere minutes.

The tour, dubbed "Upstairs at the Downstairs", will feature an acoustic set and a electric set with setlists chosen by fans on the band's website. After the overwhelming response, the band added second and third dates in most cities, mostly selling those out as well.

At present, the only tour tickets remaining are for the third Melbourne and second Perth shows.

Although the band formed in 1989, it was their third studio album "Internationalist" which vaulted the band into the spotlight, charting at #1 and then spending 100 weeks on the ARIA Albums Charts. – CelebrityAccess Staff Writers