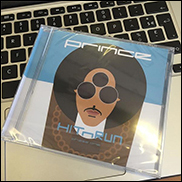 (Hypebot) – In the wake of their recent passing, this piece by George Howard looks at the surprising corollary between two artists, Prince and Richard Lyons of Negativland, both of whom greatly impacted the world of music industry copyright.

Like the rest of the planet, I am devastated by the loss of Prince. I believe history will judge him as they do Beethoven or Mozart or Davis. His legacy will be his enduring songs and performances, but his impact expands beyond the music.

We’re already, for instance, learning of the activist efforts, of which his faith/his own personality (is there a difference?) required him to keep private.

Perhaps less important, but certainly more visible, were his efforts that – in hindsight – have impacted the rights of artists.

People make light of Prince changing his name to an unpronounceable “love symbol” glyph, but this gesture, while aesthetically funky (because what gesture did Prince ever make that wasn’t aesthetically funky?) was motivated by Prince’s sense of the injustices endemic to the music industry related to copyright.

In this specific case, Prince felt that the ownership of his masters by his label for the life of their copyright was not fair. While, certainly, there are two sides to every story, and labels are easy scapegoats for aggrieved artists, the notion of an artist’s creation no longer being theirs has and always will be a controversial one.

The issue around ownership of Prince’s masters was at least partially resolved by the addition of Section 203 of the Copyright Act, which – and I’m oversimplifying, but there is a wealth of information on the topic here – allows authors to potentially reclaim their works thirty-five years after the date of assignment to another party.

On the same day that we lost Prince, it was made public that another musical and copyright pioneer had died (Mr. Lyons’ death occurred on April 19th). While not the household name that Prince is, Richard Lyons of the band Negativland was both a tremendous artist and artist copyright advocate.

Mr. Lyons and the group of which he was a founding member, Negativland, raised important issues around copyright, and, like Prince, played a significant role in making these issues part of a larger conversation.

Negativland’s 2005 essay, “Two Relationships To A Cultural Public Domain,” for instance, was the band’s attempt, “to write a definitive essay on the subjects of art, music, copyright law, culture and technology.”

Long before this essay was published, Negativland first drew mainstream awareness to the concept of Fair Use via their single entitled, “U2,” which we’d today refer to as a “mash up” or song made up of “samples.” The song – then referred to as an “audio collage” – incorporates audio from the DJ Casey Kasem, and other audio over an instrumental (there are kazoos) version of U2′s “I Still Haven’t Found What I’m Looking For.”

The incident and its related legal proceedings was then chronicled by the band in their 270 page book and accompanying CD, Fair Use: The Story of the Letter U and the Numeral 2.

The fact that I’m writing about Prince and Negativland shows just how strange the bedfellows are that copyright creates.

The fact that I’m writing about Prince and Richard Lyons today just makes me sad.

This post has been edited to reflect that Mr. Lyons died on April 19th. His death was reported on April 22nd.