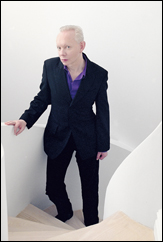 NEW YORK (CelebrityAccess MediaWire) — Rykodisc has announced the release of the new Joe Jackson record
on January 28, 2008. Entitled, Rain, it's the first Jackson record since
the brilliant and critically acclaimed Volume 4 was released in 2003.
While Volume 4 and the seven-month tour that followed featured the
reunion of the original, iconic Joe Jackson Band, Rain, was made with
three of those four members: Jackson (vocals and keyboards), Graham Maby
(bass/vocals) and Dave Houghton (drums/vocals). The record was produced
by Jackson, and recorded in his newly-adopted city of Berlin at Planet
Roc studios.

The album precedes Jackson's highly anticipated European tour which
kicks off at the Olympia Theatre in Dublin on Friday February 29th.
Jackson will then play a one-off UK show at the London Shepherd's Bush
Empire on Sunday March 2, followed by a full UK tour later in 2008.