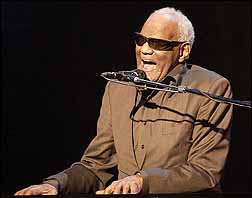 (CelebrityAccess MediaWire) — On September 29, Atlanta-based Morehouse College will host a star-studded tribute at the Beverly Hilton Hotel in Beverly Hills, CA to raise money for the Ray Charles Performing Arts Center, which is the centerpiece of a larger complex, the Morehouse College Center for the Arts. Honorary co-chairs for the event include former President William J. "Bill" Clinton, Morehouse alumnus Spike Lee, Quincy Jones and Clarence Avant, and Charles' manager and business partner for 46 years, Joe Adams.

The 12 time Grammy winner's relationship with Morehouse began eight years ago when he was invited to Atlanta to perform with the College's jazz ensemble. Bill Cosby, who hosts the tribute, opened that performance. A special relationship among Morehouse, Cosby and Charles was born.

Charles, who received an honorary degree from Morehouse, was a long-time friend and supporter of Morehouse. In 2001, he gave the College two $1-million gifts to seal a mutual commitment to find, educate and inspire the next generation of musical pioneers. The Ray Charles Performing Arts Center will enable Morehouse College to train these students once they are found.

"Over the years, Ray Charles has been a generous supporter of Morehouse, not only financially but also through his shared commitment to developing students who will be leaders and pioneers in the music industry," says Dr. Walter E. Massey, president of Morehouse College. "On Morehouse's campus, Charles' music, his voice and his camaraderie will not be soon forgotten."

The gala will celebrate the launch of a $15-million building campaign for the performing arts center. The evening will feature a series of tributes, both live and on video, as well as a preview of Universal Pictures' feature film, "Ray," starring Jamie Foxx, which is due in theatres at the end of October.

Artists scheduled to perform during the tribute are Michael McDonald, James Ingram, Gerald Levert and Angie Stone. The Morehouse College Jazz Ensemble and a host of other entertainers will also pay tribute to Charles. Charles's final CD, "Genius Loves Company," a collection of duets with famous friends, is due out August 31 on Concord Records.

"For almost 50 years, we've called Ray 'the genius.' And, he is — take it from me," says Adams. "He was a man without borders or boundaries, creatively and culturally. Indeed, he and his talents are a gift to all communities." –Jane Cohen and Bob Grossweiner